Last September, in the build-up to Penn State's first modern varsity games, Breakout Past examined the last first varsity game for PSU hockey, a 3-1 win over Carnegie Tech on December 6, 1940. The venue for that contest was the Shaffer Ice Palace in Johnstown.

With Penn State now about to move into Pegula Ice Arena, it's probably as good of a time as ever to take one more look back at that "home" rink.


The history of Shaffer Ice Palace was outlined in last year's post, but just to review: Frank M. Shaffer owned Johnstown's pre-eminent ice-making business in the early decades of the 20th century. By the late 1930s, however, artificial refrigeration had made Shaffer's outfit obsolete. So he decided to combine his facility at the end of McMillen Street with his knowledge of ice and open a rink.

Following its December, 1939 initiation, Shaffer was home to numerous events including hockey, ice shows and even boxing. In the 1941-1942 season, it gained a primary tenant in the form of the Johnstown Blue Birds of the old Eastern Hockey League. And of course, there were the Nittany Lions who, between February 6, 1940 and January 17, 1942, played at least eight of their 16 total games there, going 5-3-0 in those matches.


The Blue Birds, although successful on the ice, going 34-20-6 and tying for first in the standings, were a disaster off of it. Owner Bill "Pick" Hines had made the money to buy the team on a horse racing bet and his lack of true wealth, combined with poor attendance, came to a head almost immediately. Throughout the year, Hines was unable to make payroll and required outside cash infusions to help get the Blue Birds get through. The unstable team met its end shortly after its sole campaign when the Ice Palace was converted for manufacturing purposes supporting the U.S. effort in World War II, which began in the middle of the season with the attack on Pearl Harbor.

While it would be a stretch to call the demise of Shaffer a major factor in Penn State's varsity team eventually sharing the same fate, the loss of an available central PA sheet certainly didn't help. PSU would only play 11 more varsity games after that 1941-1942 season and, largely thanks to WWII gas rationing, only one at the Hershey Sports Arena, the other most frequent venue from those days. The reasons hockey didn't work out at that time are many and varied, but most trace back to the war in one way or another, whether it be the need for able-bodied young men overseas, materials restrictions that hampered plans for an on-campus facility, or, obviously, the choking off of the team's existing rinks in one way or another. Since college programs across the nation faced similar issues, with many suspending their teams for the duration, further complexity was added to the already-difficult scheduling process.

Duquesne Gardens in Pittsburgh is long gone. So is the original Ice Pavilion and the Mechanicsburg Skatium, PSU's temporary outpost after the Icers' first rink was re-purposed as a later-demolished field house in 1978. There are no longer tennis courts to flood across Curtin Road from West Halls, the Thompson Spring Winter Sports Park was abandoned and Beaver Field, both New and Old, gave way to development decades ago. Setting Pegula Ice Arena aside for a moment since it hasn't hosted a game yet, the only remaining structures that could have been considered a home (or potential home) for Penn State hockey are the "new" Ice Pavilion, what is now called Hersheypark Arena...

...and the Shaffer Ice Palace.

Yep, somehow, in an era that produced and then discarded ice rinks at a staggering rate (another example: Huntington, WV's Iceland Arena, which also hosted a PSU game during the original varsity era), the site of what will always be the Nittany Lions' first varsity game is still there.

It's neighborhood has deteriorated significantly since 1940, as what was once a sturdy working-class area has been largely abandoned and left for dead by relocated industry. But two functioning businesses do bookend the building. One is Jack Brown Wholesale, which actually uses the place to help sell siding, shingles and other things that would be useful to the surrounding residences. 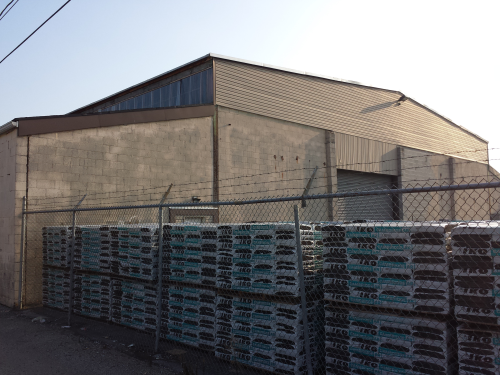 Then, after following a side that runs along an alley called Bell Place... 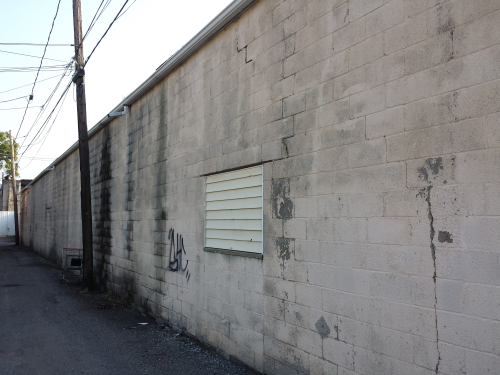 ...on the opposite end is the salvage yard for Brat Towing & Recovery, Inc. Unfortunately, Brat's fence prevents a better view, but I suspect that this is closer to what the building looked like 70-plus years ago. 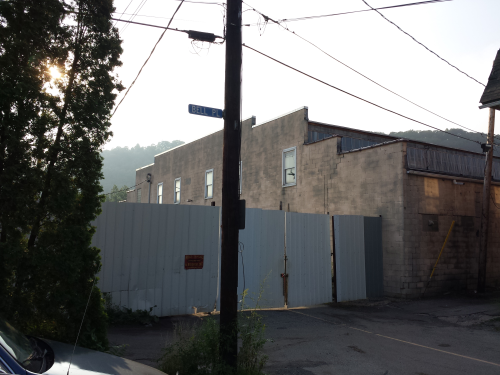 In the postwar years, 1950 to be exact, Johnstown would become home to the Cambria County War Memorial Arena. Upon its completion, the EHL returned in the form of the Johnstown Jets. That team would last until 1977 and deliver the inspiration for Slap Shot, a film shot in town (including at the War Memorial), giving Flood City a healthy degree of hockey celebrity status. Since the Jets, the arena has hosted the ECHL's Johnstown Chiefs - a team whose alumni include Icers Mark Scally, Justin Depretis, Bill Downey and Curtiss Patrick - from 1987-2010 and, beginning last season, the NAHL's Johnstown Tomahawks. 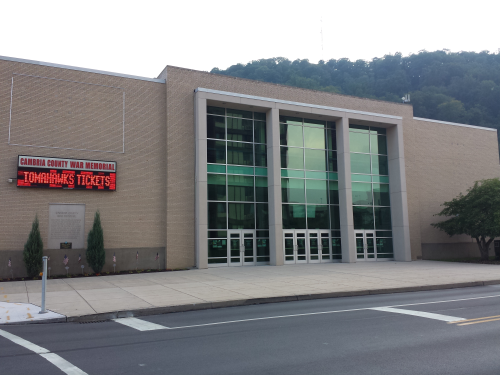 While Penn State's history at the War Memorial isn't extensive beyond the Icers-to-Chiefs connections, it's worth mentioning nevertheless. The 1983-1984 national championship team played there six times, including twice each against Alabama-Huntsville and Notre Dame (both of which are now in NCAA Division I), as well as against Arizona.
Posted by Kyle Rossi at 5:41 PM