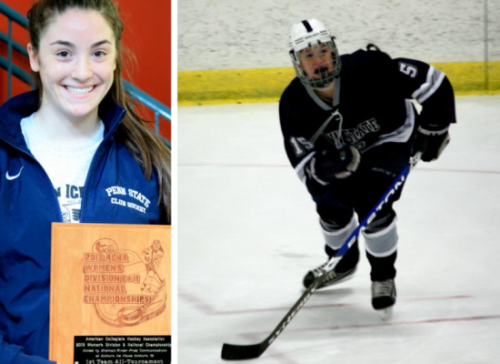 Less than a week ago, the Women's Ice Hockey Club had a large problem. Despite a robust group of returning players for this season, the team faced the prospect of having to replace the offensive production of Devon Fisk and Mandy Mortach, 2012-2013's two leading scorers, both of whom elected to sit out as sophomores. An outstanding recruiting class offered promise, but it had yet to be seen if that promise would translate to results.

Today, before playing a single game, the issue is half resolved: Fisk has reversed course and will play after all.

Here's the release from the WIHC.

Sophomore forward Devon Fisk, the Penn State Women's Ice Hockey Club's leading scorer in 2012-13, has announced that she will return to the squad this season after initially electing to sit out.

In addition to her team highs of 15 goals and 21 points in her rookie year, Fisk boasted three game-winning goals, including one against Alaska at the ACHA National Tournament in which the product of the West Chester Quakers program singlehandedly ripped the puck away on the backcheck before coming in alone to bury. The righty was also credited with the winner in Penn State's 2-1 victory over eventual national champion West Chester on January 26th. She closed the campaign with a trio of awards: team co-rookie of the year, ACHA All-American honorable mention and ACHA All-Tournament first team.

"Fisk is an athletic dynamo who creates ice vertically with her speed, strength and goal scoring ability," head coach Patrick Fung said. "Players she couldn't beat wide with speed, she would create havoc by bulling her way to the net. She also made a strong commitment to the defensive side of the game as the season progressed and I anticipate she will be a tough matchup for many teams as her career progresses."

Fisk and the rest of the team open up in just 16 days - on September 27th at 10:15 p.m. - against Liberty in the Pegula Ice Arena's Community Rink, the first intercollegiate hockey game in the history of Penn State's glittering new $90 million facility. The next day, the WIHC will head down I-99 for a rematch with the Flames in Altoona, PA's Galactic Ice Arena at 6:30 p.m. Conference play in the inaugural season of College Hockey East (which includes PSU, West Chester, Delaware and California) begins on October 11th and 12th at Cal, with the league's playoffs on February 22nd and 23rd in York, PA. The 2014 ACHA National Tournament is scheduled for March 13th through 16th in Newark, DE.

For the latest on the WIHC throughout the drive for the 2014 national championship, be sure to follow the team on both Twitter (@psuwihc) and Facebook (facebook.com/psuwihc).
Posted by Kyle Rossi at 12:24 AM