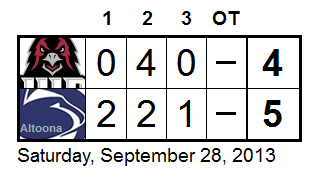 In Penn State Altoona's season opener Saturday afternoon at Galactic Ice, there were definitive traces of both the familiar and the unfamiliar in the team's 5-4 win over Indiana (PA)'s ACHA Division 2 squad.

The familiar: A wild brand of hockey that has come to characterize the aptly-nicknamed Toontown, where video game-like 8-7 scores aren't uncommon and no lead is safe.

With strength and conditioning coach Derrick Williams - the Penn State football legend - admiring his handiwork and a tightly-packed crowd joining him, Altoona broke the scoreless deadlock halfway though the first when Jeff Nelson charged the middle and deposited a pretty behind-the-back feed from David Bramley. IUP seemed to grow into the game in the aftermath of the goal, but the Lions caught a break five minutes later when Hawks goalie Dante Koeppen was forced to cover up what would have been an icing call had it not been on net. Right off of the ensuing faceoff, won by Bramley, defenseman Jack Lawn punished one to the back of the net for a 2-0 lead that held into intermission.

It's often said that hockey isn't a 60-minute game, it's three 20-minute games. Exhibit A in that argument could be Saturday's match, as after a first 20 minutes of Altoona playing how it wanted, the Crimson Hawks' style and tempo won out over the next 20 resulting in a tie after two "games."

A big reason for that was IUP right wing Bo Ruef. With Altoona still on top by a 4-2 count into the last six minutes of the middle frame, Ruef scored a spectacular goal, splitting the D on the rush, then pushing the puck through Lions goalie Zach Sheriko while being knocked over and after his initial effort was denied. Ruef remained dangerous, forcing Sheriko to make a outstanding save on Bobby Campbell after he started a 2-on-1, then assisting Richard Motto on the game-tying goal immediately after that with 2:35 left.


Prior to Ruef's burst, PSUA still seemed in control of the game, even if a bit shaky at times. Some penalty trouble followed, allowing Eric Mueller a power play slot deflection goal to make the score 2-1 with Conlan Sodrosky in the box, and Motto later shaved the lead to one on a net-front scramble with 12:08 remaining. Each time, however, Altoona had an answer - first from Brian Kruser, who answered Mueller on a Luk Devorski-generated rebound, then from Ben Kinch after Nick DeLaurentis circled high on the power play and found the left wing all alone in the slot.

After the free-wheeling first period and the mistake-laden second, the third took on its own form: that of a chess match. Both teams stiffened up defensively, the game slowed down and, although the occasional chance still presented itself, both Sheriko and Koeppen were dialed in.

The game-winning goal from the unsung player is probably a cliche in hockey, but one that proves true time and again. So while conventional wisdom dictated that a tiebreaker come from the Kinch-Bramley-Nelson line, which was dominant all game long, it didn't. Instead, it was Richie Hill, a sophomore who didn't record a single point as a freshman, powering a shot through from the left wing circle after two previous attempts were stopped by Koeppen. From there, it wasn't always smooth sailing - PSUA had to kill a cross checking call to Lawn just 41 seconds after the goal - but the Lions closed strong, keeping Koeppen under intense pressure late, to the point where IUP was never able to get an extra attacker out.
Posted by Kyle Rossi at 6:10 PM