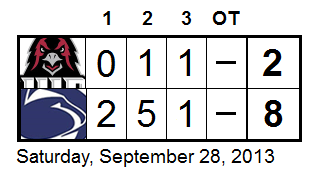 Let it be said, first of all, that IUP is not a horrible team. Playing out of ACHA Division 1 and College Hockey Mid-America, the Crimson Hawks were squarely in the middle of the conference pack with an 8-7-1 league record a year ago. And while CHMA is a one-bidder in terms of D1 nationals, IUP played three tight games against the team that took that bid (John Carroll). They initiated 2013-2014 with a split against Penn State Berks.

Yet the Ice Lions made the Hawks look pretty horrible.

It wasn't a contest for the faint of heart, as it had that typical second-game-of-the-series crankiness which manifested itself in bone-jarring hits for the first 15 minutes. But what followed was something a bit more sinister in a 49-minute-long second period that contained enough penalties to strain the inventory of available slots on the gamesheet, including a major and a game disqualification to PSU defenseman Chris Dinsmore for a headshot.

That's the bad news. The good news is that Penn State dominated the extended special teams drill. Urban got things going with 1:26 left in the first period by scoring on the advantage while parked just to the left of the net, and thanks to Dinsmore and Acker working it down low to him. Austin Wagoner - the older brother of Women's Ice Hockey Club freshman Geneva - then made it 2-0 just before the period expired when he split the Hawks defensemen and outworked both to the bouncing puck that he deposited.

The aforementioned swamp of a second period also came with benefits. After IUP's Sean Beichner dumped Lewis, but charged him to do so, Dinsmore took Taylor Vincent's pass and stepped into the high slot to fire home another power play goal with 11:10 left. Lewis - who isn't the type of guy that likes being knocked over, even illegally - got revenge for that transgression beginning less than a minute later with PSU's third PPG to make it 4-0. The payback continued with another Lewis goal after that, this time at even strength.

It's important to point out that despite the lopsided score, the plague of penalties affected both sides, making the Ice Lions' penalty killers some of the unsung heroes of the game. Guys like Urban - the epitome of a skill player who also takes care of the little things - Peter Daley, Abe Edson, Rob Fauth, and of course freshman goalie Matthew Erlichman were all essential to PSU's expansion of its lead as things progressed. The PK was finally dented on a pair of 5-on-3 goals by Anthony Venezia late in the second period and Reid Duguid early in the third (with the latter requiring a pretty spectacular effort and shot after barreling in off left wing), but the exchange of time off the ice could have easily turned out much worse for Penn State than it did.

Matrosic and Acker ensured that IUP got no closer than five, as their three goals - as well as noisy singing and chanting from the students in a packed house - closed out the last 22:56 of the game.

Up next for the 2-0-0 Ice Lions: a pair of Mid-Atlantic College Hockey home games against St. Joseph's and Temple on October 4th and 5th respectively. Both games start at 10:15 p.m. in the Pegula Ice Arena Community Rink.
Posted by Kyle Rossi at 10:06 PM