Ten Forgotten Stories of the Transition 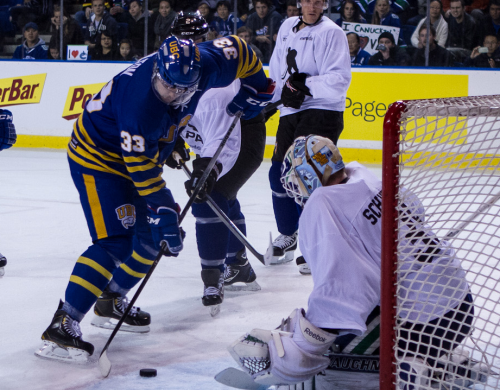 Penn State's transition from ACHA to NCAA is nearly complete by every conceivable measure, as the public opening of Pegula Ice Arena and the inaugural season for the Big Ten, the last significant milestones, are just about one month away. With that in mind, here's a look back at ten obscure stories (plus two honorable mentions) that may have slipped from the memories of most observers over the three years - yes, it's been that long - since the university announced its intent to sponsor varsity hockey and thanks to the massive donation of Terry and Kim Pegula.

The nature of the stories, of course, is that they are easy to forget - and that includes by me. If you think I've missed something more deserving than what's listed here, let me know in the comments!

While Pegula Ice Arena's groundbreaking event on April 20, 2012 - notable for Terry Pegula's announcement that he had upped his donation from $88 million to $102 million - hardly qualifies as a "forgotten story," one quirk of the proceedings does. The two men's players made available to the media that day to talk about the arena were goaltender Matt Madrazo and forward Justin Kirchhevel, neither of whom lasted on PSU's NCAA roster until its opening.

On October 1, 2011 and following a healthy buildup, Pennsylvania Puck (papuck.com) officially launched with the promise of delivering the best coverage available of Keystone State hockey. Although it tended to be a bit too focused on the AHL's Hershey Bears, it came through for the most part with an interesting mix of behind-the-scenes features, how-to videos, first-person blogging and more conventional reporting (arguably its most notable Penn State-related article concerned then-broadcaster Steve Penstone).

Rather suddenly and after only five months, the site shut down, citing traffic and ad revenue that did not meet expectations. PA Puck still maintained Twitter and Facebook accounts that shared hockey news from around the commonwealth after discontinuing its site content, but on Monday announced that those would be stopped as well.

Given the way his story suddenly re-emerged in June, it's possible that Linaker doesn't qualify as "forgotten" right now, although he will certainly re-enter that territory in time. The skinny: Linaker committed in May 2011 and, as that made him the first pledge for the 2012-2013 season, he became the first pure NCAA player and first scholarship player in Penn State hockey history.

However, before his freshman season began, the Albertan abruptly disappeared from the PSU roster, and although he attended games in a suit, he never played in one. As it turned out, Linaker was not cleared to play by the university's medical staff due to a heart issue (Linaker, for his part, disputes the assessment) and was not allowed to join the team. He eventually left school and will sit out the 2013-2014 season while continuing to explore other college options both north and south of the Canadian border.

9. The Blowout at RMU

Contrary to popular belief, the Penn State women did not play Robert Morris for the first time on November 10, 2012 at the Ice Pavilion. The meeting in question actually took place the previous year, on September 23, 2011, at RMU's 84 Lumber Arena as an exhibition opener to the final Lady Icers season. Although PSU's team included future NCAAers Kate Christoffersen, Tess Weaver, Katie Murphy, Madison Smiddy, Lindsay Reihl and Cara Mendelson (Taylor Gross and Jess Desorcie didn't arrive until mid-season), the hosts scored early and often in a 12-0 shellacking.

The Colonials' goal scorers included players like Rebecca Vint, Thea Imbrogno and Jamie Joslin who would star against the Nittany Lions' NCAA entry the following year, while Murphy and current Women's Ice Hockey Club president Allie Rothman led the Lady Icers with two shots apiece. RMU went on to win the College Hockey America playoff title, so it's not like they were a terrible team.

In a bit of a bizarre maneuver - particularly since Penn State had not yet announced its intent to elevate hockey to varsity status - current Michigan State coach Tom Anastos, then the commissioner of the CCHA, told the Detroit News in August of 2010 that he'd love to have the school in his league. "They are a very attractive choice - very attractive," Anastos said. "They're in a different market than we're in, more and more U.S. players are on college rosters, and there's tremendous growth of the sport in Pennsylvania."

The quote actually hurt PSU in the public's estimation. One year earlier, the CCHA had rejected an application from struggling independent/cause célèbre Alabama-Huntsville, and in tandem, the two events led many to speculate that the 11-team league was "saving a seat" for PSU, to UAH's detriment. The CCHA met its demise after last season when the later-formed Big Ten took away Michigan, MSU and Ohio State (as well as Penn State) and other schools followed in jumping ship. Anastos, in all likelihood, saw that outcome in his crystal ball a couple years ahead and, without regard to UAH's application, was doing what he could to preserve his conference.

Like Linaker, Carr was a first - along with Jake Friedman, he was the initial Penn State commit following the Pegula donation. Unlike Linaker though, Carr actually played at PSU, suiting up in three games as an Icers freshman in 2011-2012 and going 2-1-0 with a 2.00 goals against average, a 0.919 save percentage and a shutout of Rutgers. The product of Pine Bush, NY had enjoyed a great campaign with the EJHL's New Hampshire Jr. Monarchs the season before, earning a good chunk of minutes in a tandem with current Boston College netminder Brian Billett. As a result, many (guilty) pegged him as a significant contributor to the inaugural Nittany Lions, but he quickly fell behind Matt Madrazo and P.J. Musico in the Penn State crease and never recovered.

Over winter break and just before the Icers' outdoor game against Neumann at Philadelphia's Citizens Bank Park, Carr transferred to NCAA Division III Western New England University. In a season and a half with the Golden Bears, he has compiled a 7-8-1 record, a 2.94 goals against average and a 0.919 save percentage.

Prior to and throughout most of the 2012-2013 season, there was a push from the fine folks in the athletic department to develop a name for Penn State's hockey student section. In addition to the standard social media solicitations, there were suggestion boxes set up at the Ice Pavilion during games. Given that we haven't heard a thing about it in roughly nine months, it's probably fair to consider the effort abandoned. And I'm fine with that. After all, PSU's well-regarded football student section doesn't have a name. The lesser-regarded basketball student section does have a name, one that does little other than draw out snarky hoops loyalists when an "ill-informed" journalist dares to use "Nittany Nation" in any sort of general context. To paraphrase noted vampire hunter Abraham Lincoln, better to remain nameless and be thought a fool than to come up with a really terrible name - The A-Team at Michigan State, for example - and remove all doubt.

The what? Yeah, pretty much. One early rendering of Pegula Ice Arena (below) included a large banner for the mythical association fronting the upper level. However, as I'm sure all of you know by now, the "shoot twice" end is, in actuality, home to the student section and not the Founders Club - and it looks nothing like what is depicted. Although the rendering quickly became dated, it remained a favorite among bloggers and media well past its sell-by date, possibly due to its showing a packed bowl with a game on the ice (something that was generally not the case with other, more accurate versions). The Founders Club was still receiving circulation as recently as January, even with the actual arena over halfway complete. 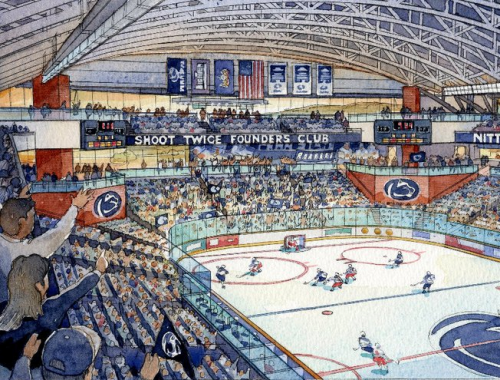 In July 2012, then-junior John Romano initiated a movement for a student hockey campout, similar to the well-known Paternoville Nittanyville for football games. There was a Twitter account, which quickly gained a couple hundred followers. There was a Facebook page. There was some publicity, including a pretty cynical Three Stars entry on this blog and a much more positive turn in the Collegian that included quotes from Connor Varley. Then, shortly after the Nittany Lions' inaugural jersey unveiling event that September, it went poof faster than Keyser Soze and hasn't been heard from since.

The last, frantic days of the search for Penn State's first NCAA men's coach in April of 2011 were truly a spectacle, one that gained national interest as the college hockey world waited to hear which of finalists Guy Gadowsky, Scott Sandelin and Mark Johnson would get the nod.

The choice, obviously, ended up being Gadowsky, but Wisconsin athletic director and noted windbag Barry Alvarez stirred up controversy when he claimed days later that Johnson had received an offer from PSU and turned it down to remain the women's coach at UW, his alma mater. Was Gadowsky a Plan B, or even a Plan C (Sandelin and Minnesota-Duluth, his employer both then and now, remained silent on the issue)? Not so fast. A couple weeks after Alvarez's comments, Johnson went on the record to dispute his boss' claim of an offer and even said that he was relieved at not having to face a difficult choice.

When Gadowsky was hired, he did not directly replace then-Icers coach Scott Balboni. In fact, the two were listed as co-head coaches for 33 extremely awkward days. The idea, initially, was for Balboni to remain as the game-day, ground-level coach, allowing Gadowsky and his staff additional time to recruit while also evaluating players and implementing systems. Fortunately, sanity eventually won out: Gadowsky expressed a desire to take on the whole ball of wax, and Balboni obliged by resigning.

While Penn State has had a couple of traditional major junior defections already in the forms of Thomas Welsh and Conor Garland, Jessi Hilton was sort of the backwards version of that. In early July 2011, and at the same time as Kenny Brooks, Hilton committed to PSU.

He was with the AJHL's Sherwood Park Crusaders at the time, but had previously played 12 regular season games with the WHL's Calgary Hitmen during the 2008-2009 and 2009-2010 seasons, which not surprisingly presented issues. Quietly, Hilton disappeared from the Nittany Lions' commit list just one week later, when the NCAA wouldn't grant his appeal concerning those "professional" games - even if the appeal was granted, he still would have had to sit out a full season plus 12 games. Fortunately, the Hilton story has a happy ending, as he wound up at the University of British Columbia (the CIS is okay with major junior participation and UBC, by the way, is where former PSU women's player Katie Zinn transferred) and scored 10 points in 22 games as a freshman last year.
Posted by Kyle Rossi at 12:05 AM