UPDATE 9/10, 1:10 P.M.: While there was never any official release from the university, the name "Roar Zone" for the Pegula Ice Arena student section has been confirmed numerous times through official channels, including this tweet.


If a tweet from Tommy Olczyk is to be believed, the Pegula Ice Arena student section may have a name.

"Roar Zone" has been corroborated elsewhere, there is apparently signage with the name on the arena, and another (unlinkable) source has indicated that it will officially be announced in conjunction with the sale to fill the student section, which takes place beginning at 10:00 a.m. on Tuesday in the HUB.

It appears as if labeling the naming process one of the ten forgotten stories of the NCAA transition was a bit premature. Still, one self-quote from that post seems appropriate:


To paraphrase noted vampire hunter Abraham Lincoln, better to remain nameless and be thought a fool than to come up with a really terrible name - The A-Team at Michigan State, for example - and remove all doubt.

This name is precisely the sort of thing that inspired that sentiment. It's bland. It identifies an area and not the people in that area, as with most student section names that have survived over time (Lynah Faithful, Lawson Lunatics, Children of Yost). It incorporates nothing from the arena - the slope of the student section seemed like an automatic for any name - the sport of hockey, or really, even Penn State. It's generic to the point where it can be used by any school with a cat mascot in any location, and for any team. Actually, you can probably throw professional teams in there as well.

Long story short, I hope that this is all a big misunderstanding. Or that the powers that be go back to the drawing board. It's not Buffalo Sabres jersey terrible to be sure, it's just incredibly uninspired.

There is good news: the view from the top of the student section will be unreal, and you may not want to be first in line on Tuesday. Here's Olczyk's picture. 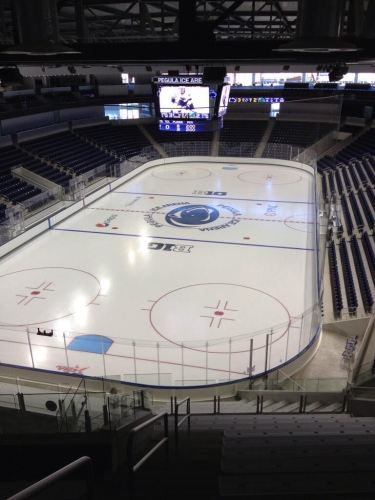