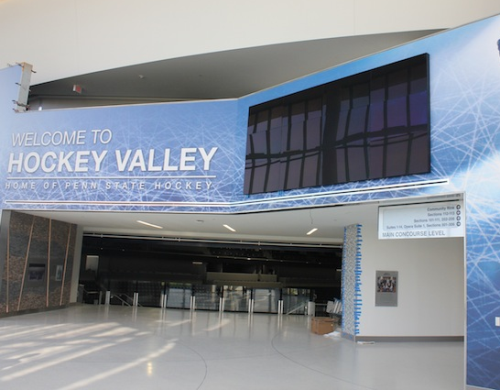 A sure sign that the season is almost upon us: the Collegian is back at it on a regular basis. This article, which takes an overview of women's team freshmen Laura Bowman, Kelly Seward, Amy Petersen and Sarah Nielsen, is a great way to get the fall semester going.

2. Steinour reflects on his career in "Hockey Valley"
(Stack The Pads)

On the other end of the career curve, of course, is recently-graduated men's forward Eric Steinour. What's Big Stein up to now? Something that sounds a little more difficult than writing a hockey blog:


I am working for Affiliated Engineers in Chapel Hill, NC as a Mechanical Systems Designer. Affiliated Engineers is a multi-discipline technical consulting firm. The team I am a part of is specifically involved in designing steam and chilled water plants and distribution systems. We design new systems as well as redesign existing systems to be more efficient. Many of our clients are universities and medical facilities.

1. A Look Inside The Pegula Ice Arena
(Onward State)

Not a particularly tough call this week, as the fruit of Onward State's all-access look inside the arena is the most extensive peek we've received since the ice was installed. 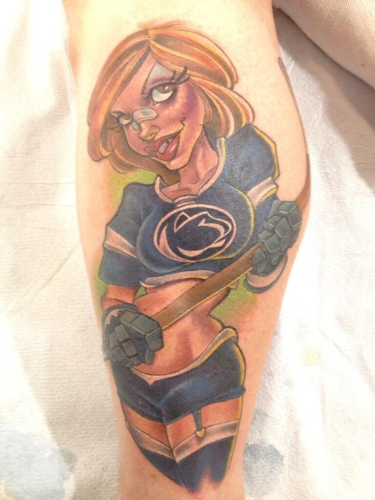 Amazing? Horrifying? I suspect that there's very little middle ground on this one, as tends to be the case with tattoos.

Also, apropos of nothing, Runnin' With The Dogs is both the worst college hockey blog out there and written by the biggest tool out there.

Alumni activist group Penn Staters For Responsible Stewardship - an organization drawing even fewer middle-ground opinions than most tattoos - has assembled a list of former PSU student-athletes who support the lawsuit brought by the Paterno family (as well as several faculty and Board of Trustees members) against the NCAA over... well, you know. Hockey's sole representative is former Icers captain Ryan Wick, a 2000 graduate.

Last Monday, USA Hockey unveiled the players who will participate in the second annual CCM/USA Hockey All-American Prospects Game, which will take place on the 26th in Pittsburgh's Consol Energy Center. Freshman goalie Eamon McAdam participated in last year's inaugural edition of the draft showcase in Buffalo as part of his push to the 70th overall pick. However, there will be no repeat participation by a Penn State commit, as well-regarded defenseman Kevin Kerr was surprisingly snubbed.

On a related note, if anyone needs a hotel room in Pittsburgh on September 26th, let me know in the comments.

In other "yay, the Collegian's back" news, new men's beat writer Darian Somers - you'll like him, trust me - takes a run at Brian Tripp, the team's new radio voice. Tripp replaces Steve Penstone who, contrary to the verbiage used in the article, was let go this offseason.

The Old NHL, Penn State Hockey, and Your FGSB Mailbag
(The 700 Level)

In response to someone asking how badly Penn State is going to get spanked this year:


Penn State’s move to The Big Ten is quite a big deal, especially for their hockey team, which I’m sure everyone knows went D1 last year. Their first year in D1 they were independent and actually didn’t do too badly for a really young team. On the official roster there were 14 freshman, 6 sophomores, and 7 juniors. Hey, you when go from club team to the big leagues that transition is going to take some time. With this young team they took down some big clubs in Wisconsin, Vermont, and Michigan State. The realignment has everyone saying they’re going to get whooped up on. On paper it looks like it, but I’m not so sure.

Penn State’s new conference is made up of them, obviously, and Minnesota, Wisconsin, Michigan, Michigan State, and Ohio State. Those are some perennial power houses in the college hockey world, but Penn State is looking to be better than last year. They have their first ever NHL draft picks joining the program this season, and as you can see above have already done surprisingly decent with the guys that are ALL coming back this year (they went 13-14 last season).

It seems as if new women's team director of operations Alex Dawes will be missed in the neighborhood of Utica College, his previous employer. Seriously, I probably won't even get a write up this flattering when I die. 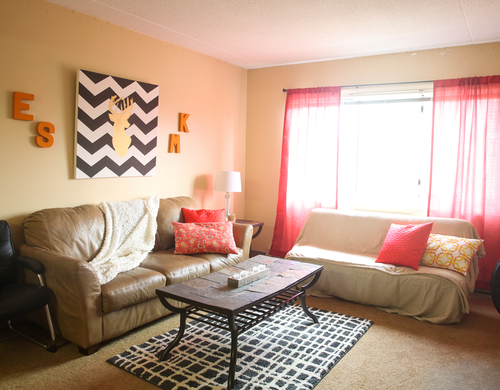 Ever wonder what the apartment of women's forwards Katie Murphy and Shannon Yoxheimer (and their roommates) looks like? Onward State's new Cribs series has you covered. Since it's way nicer than my place, I would've been okay not finding out about it.

Leading off the opponent news section of Three Stars this week are the new captains of the Minnesota Golden Gophers, senior forward Nate Condon and junior forward Kyle Rau. Both are NHL draft picks, in 2008 by Colorado and in 2011 by Florida, respectively. Of course, you can't swing a dead cat at Minnesota's roster without hitting three or four draftees, so I'm not sure of that fact's newsworthiness.

Incoming Gophers freshman Gabe Guertler, on the other hand, is not off to a good start if he wants to be a captain someday. Guertler received a DWI while operating a moped Friday night/Saturday morning and has been suspended by the team until at least November.

Score one for common sense as former Vermont Catamount Justin Milo's "waaaah they cut me... no fair!" lawsuit against UVM and coach Kevin Sneddon has been thrown out. RIT's men unveiled a new jersey last week. It's a throwback to the school's inaugural 1968 design, but with modern logos. Solid concept and well executed.

Brian Selected in Second Round of CWHL Draft
(rmuathletics.com)

Last week's Canadian Women's Hockey League draft was pretty good for College Hockey America, led by former Mercyhurst star Jess Jones, who was chosen third overall by the Brampton Thunder. Robert Morris goalie Delayne Brian (formerly of Wayne State as well, leaving there when WSU's program folded) was the first pick of the second round by the Alberta Honeybadgers, and a pair of Toronto Furies-drafted Syracuse alumnae, Holly Carrie-Mattimoe (second round) and Lisa Mullan (eighth round) closed things out for the conference.

Jones and Mullan both graduated from their schools in 2012 and never faced Penn State. Carrie-Mattimoe, however, had two goals and two assists in four games against PSU as a senior last year. Brian backstopped the Colonials' 4-1 win at the Ice Pavilion on November 11, 2012 with 19 saves and backed up Kristen DiCiocco in the other three PSU-RMU meetings.

If you're the type of person who still gets excited by outdoor hockey not involving your favorite team, good news: the annual Frozen Fenway series is returning in January. Penn State opponents Boston College and UMass-Lowell are both among the eight Hockey East teams involved in the event hosted by the famous home of Major League Baseball's Boston Red Sox.

While details of the alcohol-related tomfoolery of Kennesaw State at the ACHA Division 3 national championships back in March have not come to light, it must have been a pretty good time. Last we checked in, KSU had suspended the team for the entire 2012-2013 season. Now, it's banned the coaching staff for life. Even Jerry Sandusky can, theoretically anyway, outlive his sentence. Not so much if you're affiliated with Kennesaw State and get bombed at a hockey tournament, I guess.

In other #ACHAProblems, former California (PA) hockey playing brothers/marijuana aficionados Steven and Jesse Powell waived their preliminary hearings and will stand trial. As you may recall, the Powells' arrests back in April led to Cal's suspension of the entire Vulcans hockey program, a sanction that was eventually lifted under the condition of required drug testing.

While the incident is obviously tailor made for jokes, I'll pass this time around. Instead, I think it needs to be said that Cal has handled the whole thing flawlessly from day one (in my view, anyway), and the university deserves to be commended for that.

Guy Gadowsky ran in the inaugural Mt. Nittany Marathon on Sunday. Which is notable in and of itself, but as an added bonus, it led to another look at Penn State's new white jerseys, via Nate Jensen's Twitter. 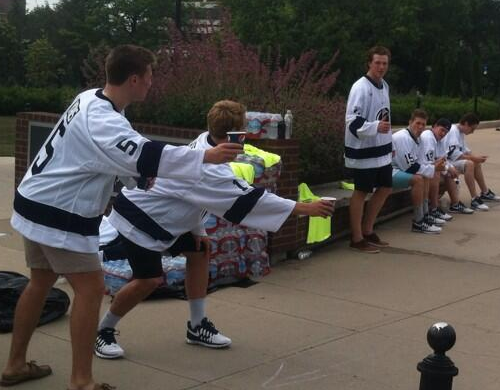