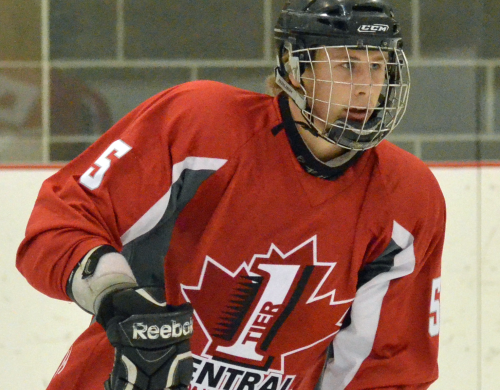 Myllari's commitment breaks some new ground for the Nittany Lions program: he's the first 1997 birth year on board, and partly as a result, he's (tentatively) the first member of the 2016 recruiting class. He will play this season with the Kanata Stallions of the Junior A CCHL, the league that produced sophomore forward Jonathan Milley.

There's plenty of evidence that the left-handed shot is a pretty solid get. According to Over The Boards:

A scout who had been filling us in on Ontario prospects for our October [list of top uncommitted players] noted the following about the 2nd round OHL draft pick: "Very good skater who plays with the poise and presence of a veteran - even as a 16 year-old [CCHL] rookie. Can play in all situations and makes great puck decisions. Smart and solid in his own zone, has a good stick and isn’t afraid to play physical. I would think he’s a top 4 guy at Penn State, growing into the top pair as he develops."

Myllari, as well as father Roy Myllari, also have opinions of that nature:

"My vision, moving the puck and having it on my stick," said Kris when asked to characterize his game.

"I’m hoping to fill out a lot more. The strength side of my game will come around as I continue to get older and bigger."

Roy Myllari said his son is an offensive defenceman by nature but can play it both ways.

"He had a good season last year for sure, both offensively and logging big minutes," Roy Myllari said.

As stated in the first quote, he was a second-round pick (34th overall) by the major junior OHL's Kingston Frontenacs back in April. Given the lofty status of his selection, along with a bit of personal history, Myllari seemed destined to join the Frontenacs at some point. Roy was a Memorial Cup champion in 1984 with the storied Ottawa 67's, and he also played with Frontenacs GM/NHL legend Doug Gilmour on the Cornwall Royals. Suffice it to say that the younger Myllari is familiar with the benefits of that route. As a cherry on top, his sister attends Queens University in Kingston. 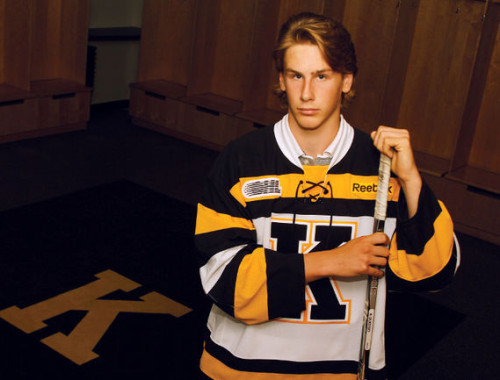 Nevertheless, Myllari's college commitment indicates that, for now, the Frontenacs are not in the cards. It doesn't seem as if Penn State was a decision made on a whim - in fact, he attended the OHL team's camp in late August and, along with his parents, had extensive discussions with management on how he fit into their plans. Ultimately, Myllari reported to Kanata rather than attempt to survive as a depth defenseman with Kingston in order to keep both options open. At some recent point, he swung all the way over to a preference for the NCAA, possibly due to a strong emphasis on education from his parents.

Should it come up at some point, the Youngstown Phantoms own his USHL rights, as they also drafted him, in the eighth round back in the spring.

Did I mention that he's a solid get? Myllari came up with the Ottawa Senators AAA program and won the Ontario East Minor Midget championship last season, and he was also a selection to the Ottawa District Hockey Association representatives that won the OHL Gold Cup against the best U16 players from across Ontario. Let's keep the train of positive scouting reports rolling as well:

Gregg Kennedy, Myllari's coach the past two seasons, said the defenceman is aware of the kind of off-ice dedication needed to get to the next level.

He said Myllari displays great leadership qualities and has the respect of his fellow players and the coaching staff -- part of the reason he was named captain.

"He's the leader on and off the ice for these guys and has been for years," said Kennedy.

Kennedy compared Myllari to Wade Redden and Alex Pietrangelo because of his strong skating and his ability to play well on both sides of the puck.

Could Myllari still jump to major junior at some point? Absolutely. At the risk of sounding repetitive (or obvious) but in the interest of promoting understanding for those new to NCAA hockey, it's always out there until a player ages out - even for a guy like Eamon McAdam, who signed a letter of intent and made it to campus could theoretically sign with the OHL's London Knights at any point. The fact that he was drafted highly by an OHL team more or less shows that they're not going to let him get away without a fight. And it's a long way until 2016.

Nevertheless, let's set that aside for now and celebrate the fact that Penn State has added another potential building block set to arrive at a time when the Nittany Lions may arrive as a national contender.
Posted by Kyle Rossi at 1:04 PM