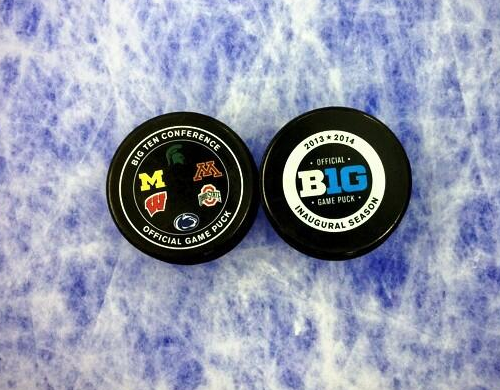 To kick off media day festivities on Thursday, the Big Ten made three key announcements. One, obviously and shown above, was the reverse side of the game puck, showing the logos of all six schools (above). The side with the conference logo has been out there since last month.

Generally, conference media days also see the release of a preseason all-conference team. Instead, possibly due to the small number of teams in the league, the Big Ten tweaked that format into a 13-player "watch list."

Yep, that's right, not a single Nittany Lion. No Eamon McAdam, no Casey Bailey, no David Glen. Being shut out from an all-conference team is one thing, because in that case it has to be argued that a Penn Stater deserves a spot more than someone else. But a "watch list?" Would it have killed anything to list three from each school? Ask the six coaches to name two or three players from each opponent, pick a couple with the most mentions. The ease of doing something like that makes this watch list pretty absurd in my view. Why shaft one conference member when it's not even necessary?
Posted by Kyle Rossi at 9:25 AM