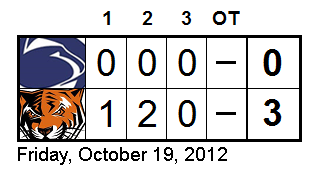 I'm not old enough to remember when Penn State played in the old ICHL from 1985-1992 (affectionately called the "Iron League" by Joe Battista and others who lived it). But thanks to Friday night's game at NCAA Division III Buffalo State, the first true road affair of Penn State's men's NCAA era, I feel like I got a crash course.

Everything I've ever heard about the ICHL came to roost in the contest between PSU (1-2-0) and former Iron League rival BSC (1-0-0, 0-0-0 SUNYAC), which ended up preceding the Nittany Lions to NCAA status by 19 years. There were tons of penalties, some warranted, some not (I'm not normally someone who bags on officiating, which hopefully adds a degree of credibility to my doing it here). There was unpredictability. There was intense hostility, both from the players on the ice and from several of the school-record 1,619 fans in the stands who were more than happy to remind the solid Penn State contingent present that yes, the Jerry Sandusky thing happened.

There was even a little bit of a parallel with the Icers' last-ever game in the ICHL. On March 14, 1992, a heavily-favored PSU, which had gone a league-record 14-1-1 in conference play during the regular season, went up to Buffalo and was upset by the last-place Bengals in the ICHL semifinals.

Really though, this was more about the penalties than the signs in the stands or the ghosts in the rafters. Of the 60-minute hockey game, exactly 19 minutes were spent without at least one player serving a major or minor penalty. During the game's seventh infraction (a Brian Dolan interference penalty at 15:05 of the first period), Buffalo State got all the offense they would need. Nick Melligan, a sophomore forward from Sanborn, NY, rifled a shot from the (very) high slot towards the net. A cluster of Nittany Lions in front managed to mostly, but not completely, block it. The result was a puck that trickled - almost as if in slow motion - past Matt Skoff, who was unable to locate it after the initial shot.

In hindsight, between that play and the BSC student who won $1,000 by making the Score-O shot during the first intermission, it should have been obvious that Friday night would belong to the Bengals.

Mike Zannella and Trevor McKinney probably could have fit the biscuit through a tiny hole in a board on their second period snipes, one from each circle, while Joe Lordo was serving a charging major for a hit in the corner to Skoff's right.

Even through all of that, it never felt like the game was completely out of control. Penn State was, despite the deficit, the better team in the first period, outshooting the Bengals 19-7. Even as late as a Cory Gursky tripping major at the 10:12 mark of the third period, it felt like if the Nittany Lions could get something - anything - going, they would have a shot at a comeback. However that five-minute advantage, as with all PSU offensive efforts (including eight other power plays), came up empty thanks largely to the strong positional play of BSC goalie Kevin Carr. Carr ended up with a 35-save shutout.

In all though, it has to be said that PSU regressed following the first intermission. The Bengals won the shot count from that point on, and the nature of the litany of penalty calls against the Nittany Lions gradually and generally transformed from fabrication to frustration.

Good news? Sure, I can do that.