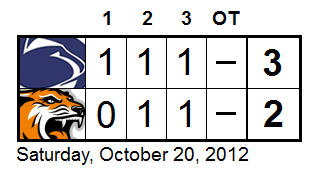 That one-liner, of course, references the fact that the Nittany Lions were expected by most to handily beat Division III Buffalo State on Friday night but lose to RIT when things, shockingly, ended up going the other way around. PSU certainly isn't the first team to follow an unexpected loss with an unexpected win, although they may have set some sort of record for distance covered between the two games. Buff State is a middling DIII program. RIT went to the Frozen Four in 2010 and won in Ann Arbor last weekend. Considering all factors and on paper, the weekend opener was one of the ten easiest games on PSU's schedule, while Saturday night was easily one of the ten most difficult.

Of all the differences - toss the team's play, the opponent's compete level and the officiating in there too, naturally - maybe the most significant is the feeling one got following the final horn on each night. After Buffalo State, the Nittany Lions could lose any game, maybe even including those against ACHA teams. After RIT, all things seem possible. Union? Air Force? Michigan State? Wisconsin? Sure, why not?

I'll leave the finer points of the match's events to the recaps above and the live blog below, but suffice it to say that October 20, 2012, the Nittany Lions arrived as an NCAA Division I team. Emphasis not just on "Division I," but on "team" as well - from P.J. Musico and his 40 saves, to Nate Jensen and his denial (in my judgment) of two goals with timely blocks and stick jams, to the continued grit from David Glen and his linemates, to the necessary offense from Max Gardiner and Casey Bailey, to everyone who stepped on the ice during the last 4:13 of the game when PSU had to kill a George Saad checking from behind major while clinging to a one-goal advantage - the entire roster contributed to this in some important way.

No, it wasn't PSU's DI debut, and it wasn't even the first win. But this feels different. Somehow more legitimate. Few programs in DI would have any issue with AIC at home (or a de facto home). RIT, on the other hand, gives most reason for concern, including Michigan last week, St. Lawrence and Cornell in previous homecoming games, and Denver and New Hampshire in the 2010 NCAA Tournament. Beating RIT, simply put, is a quality win by any program's measure. Here's to many more.