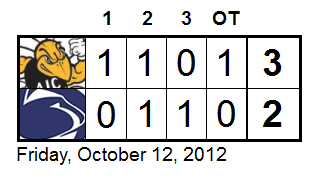 Jon Puskar's deflection goal with just 21 seconds remaining in overtime wrote a heartbreaking ending to what on balance was a joyous occasion, despite Penn State's 3-2 overtime loss to AIC in the first NCAA Division I game in program history in front of a sellout crowd of 1,300 at the Ice Pavilion.

The star of the game, without question, was senior Yellow Jacket goaltender Ben Meisner. Meisner made an unreal 61 saves on 63 shots (and you thought PSU shot totals like that were a thing of the past) to take first-star honors. The 61 saves were an AIC and Atlantic Hockey record. In all, the Nittany Lions made 116 attempts toward the AIC goal. George Saad (twice), Jonathan Milley and Taylor Holstrom were a few of the more spectacular Meisner stops.

Despite PSU's dominance, it still somehow felt like the team was chasing the game throughout. With Mark Yanis in the box for roughing, Nathan Sliwinski gave AIC the lead just 2:43 into the game on a rebound goal. That lead held up through numerous close calls and into the second period. Just after one of those close calls, involving Casey Bailey cutting across the slot, the big freshman repositioned himself just next to Meisner, which paid off with a slice of history in the form of a rebound goal, the Nittany Lions' first as an NCAA Division I program. Joe Lordo and Nate Jensen were given the assists at 4:37 of the second period. 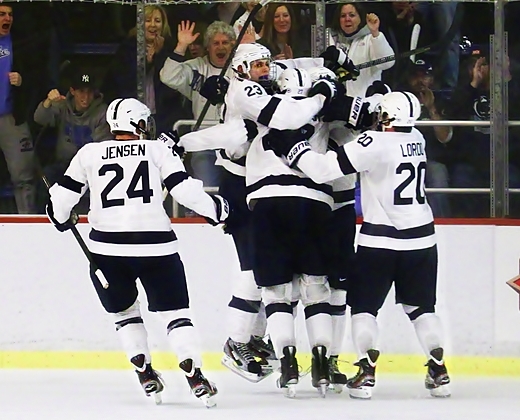 Chris Markiewicz's deflection goal cut that celebration off six minutes later to restore the AIC advantage. Frustratingly, it looked like that might somehow hold up as the game winner until 6:05 left, when Taylor Holstrom snapped off a filthy wrister to blow the roof off of both the net and a packed Ice Pavilion and get the teams back on level terms. A Penn State winner from that point would have transformed Friday night from "historic game in front of an electric crowd" to "story for the grandkids," but Puskar's OT winner off of Jake Williams' point shot rendered the game one to forget, yet one to remember at the same time.