Welcome to Club Sandwich, the new weekly post recapping the exploits of Penn State's ACHA Division 2 men's and women's teams. Because it's not a real TYT post without an awful series title.

The women don't start their inaugural schedule until this Saturday at California (PA), so this one's all about the Ice Lions and their 3-0 weekend to open the regular season. 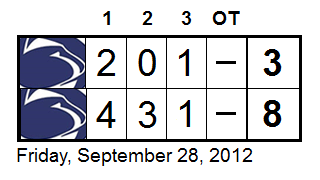 A home beatdown of the Berks campus' team, which plays in D1 and even made an ACHA National Championships appearance in 2009, opened the Ice Lions' regular season.

Berks had no answer, however, for three-goal bursts in each of the first two periods. Mac Winchester, Fredrik Linge and Ryan Urban put the Ice Lions in front for good over a 1:26 span midway through the first period. A comparatively slow three goals from freshman Taylor Vincent, Linge, and a shorthanded effort from Franky Reluzco took 2:02 early in the second 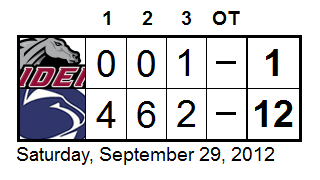 In a rematch of last season's MACHA North championship game (won 4-1 by PSU), the Ice Lions blasted Rider in the weekend's middle game.

Christopher Putsch and Chris Lewis both had hat tricks on a night when 15 different players registered at least one point, and nine had at least two. Putsch's near-natural (he scored three of four bridging the first two periods) was arguably the point that converted the game from mere decisive win to pure laugher. Mike Broccolo and Joe Zitarelli also had three points each for the Penn State.

Teddy Steinhart made his first career start in goal, turning aside 12 of 13 Rider shots. 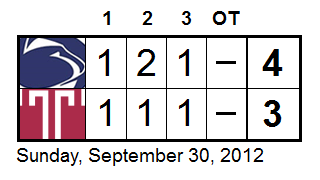 Temple, another MACHA North rival, gave the Ice Lions all they could handle Sunday afternoon at the Northeast Philadelphia Skatezone. But two goals from Russo helped an undoubtedly fatigued Penn State pull off the weekend sweep by winning the season's first away game and the Ice Lions' 21st in a row against conference foes.

Russo started the scoring and also put Penn State ahead for good with just three seconds remaining in the second period. The game winner, however, came off the stick of Ryan Urban. The sophomore forward's goal was the only special teams marker of a chippy game - and it was shorthanded early in the third period. Urban's tally, combined with Russo's second, broke a pattern of the teams trading goals and was ultimately the difference, despite Chris Brennan's wrister setting up a tense final ten minutes.

Lewis and Joe Zitarelli each added a pair of points to the PSU effort. Jayson Marbach was outstanding for Temple, as he had a hand in all three goals. His team's goaltending was a huge reason why the score was dissimilar to Penn State's other two games, even with the Ice Lions firing 36 shots towards the Owl net.


Despite letting up four goals, junior goalie Chris Mullen stood out for the second consecutive game in goal, making several saves on point blank opportunities. He also lit up the crowd at Northeast Skatezone with a series of acrobatic stops to preserve a tie as time expired in the first period, and walked off to a standing ovation.

Even with the hot start there's little time to rest, as a second consecutive three-game weekend is on tap. The Ice Lions will battle D1 Lebanon Valley College at home Friday night at 8:00 p.m. before heading down to Washington, DC for the ACHA Showcase. PSU's matchups there will include Miami University on Saturday and Providence on Sunday.
Posted by Kyle Rossi at 12:19 AM