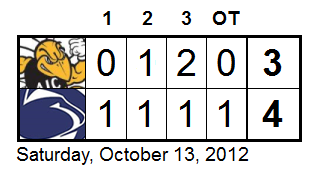 Penn State is on the board in the NCAA era.

David Glen's heroics just 38 seconds into overtime gave the Nittany Lions a historic first NCAA win, 4-3 over American International Saturday night before 5,389 fans at Mohegan Sun Arena in Wilkes-Barre, PA. The result, of course, provided some measure of revenge for a PSU team that dropped Friday's series opener to AIC in overtime.

I was covering the women's game against Syracuse Saturday night (hey, I'm just one guy), so let's borrow from the accounts of those who actually saw the game for some of the finer points (all of the quotes that follow are from the links above).


Freshman Curtis Loik (North Vancouver, B.C.) chipped the puck past an AIC defenseman before sending a pass to classmate Kenny Brooks (Las Vegas, Nev.) along the right-wing boards. Brooks then slid the puck to Glen in the slot, where he rifled a shot past AIC netminder Ben Meisner for the winning tally.

I wouldn't expect anything less from Loik, a guy who will rapidly become a fan favorite for things that don't always result in second assists.

Meisner, the hero of Friday night who was also outstanding on Saturday with 40 saves on 44 shots, was beaten twice by Glen. The Alberta native opened the game's scoring, in addition to closing it. According to AICYellowJackets.com:


Penn State got on the board first, as freshman center David Glen (Fort Saskatchewan, AB) won a draw and flipped the puck over the head of senior goalkeeper Ben Meisner (Halifax, NS) to give the Nittany Lions a 1-0 lead. The goal was unassisted, at the 16:11 mark of the period.

PSU did not enjoy the same shooting and territorial advantage as on Friday night, and so found the Yellow Jackets difficult to shake. Following Glen's first goal, Chris Porter evened the game with Max Gardiner in the box for tripping. The Nittany Lions, perhaps realizing that a one-goal lead was insufficient, built a two goal lead instead. From GoPSUSports.com:


Yanis recorded his first goal at 16:26 of the [second] frame to give Penn State a 2-1 advantage. The blueliner skated into the offensive zone and unleashed a shot from the high slot that found the back of the net.

With 15:53 left in the third period, Milley tallied the first power-play goal in Penn State history. AIC attempted to clear the puck out of its zone, but the puck bounced off Max Gardiner's (Deephaven, Minn.) shin guards. The sophomore collected the puck and sent it over to Milley, who fired it past Meisner.

AIC bounced back according, once again, to their official site:


AIC would cut the lead in half with a power play tally of their own, as Sliwinski stole the puck along the left half-wall and cut into the slot, firing a low wrist shot that hit off the post and into the net at 7:54 of the third. The goal was unassisted.

Pleskach then tied the game at 3-3 late in the frame, stealing the puck in his own end and breaking up the ice, cutting across the crease before sliding the puck under sophomore goalkeeper PJ Musico (Orange, CA) to draw even at 15:22.

Speaking of Musico, the keeper who defines Caliswag was solid in collecting his first NCAA win, as he stopped 32 of 35 Jacket shots as Guy Gadowsky looks to be using a rotation of Musico and freshman Matt Skoff to start the season.

Next Saturday, Penn State will face perhaps its toughest early-season test in the form of RIT at Rochester, NY's Blue Cross Arena. The game will be the Tigers' annual Brick City Homecoming tilt and is expected to draw in excess of 10,000 fans. The evening before that, the Lions will stop in Buffalo for a matchup with NCAA Division III Buffalo State. The Bengals are an old archrival of the Icers from back when both schools were members of the International Collegiate Hockey League between 1985 and 1992.
Posted by Kyle Rossi at 1:46 AM