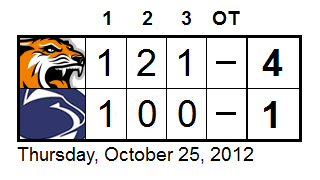 Box score // GoPSUSports.com recap // RITAthletics.com recap
Daily Collegian recap // Rochester Democrat and Chronicle recap
Penn State finally scored a goal at home in the third Ice Pavilion game of the NCAA era, thanks to freshman sniper Shannon Yoxheimer's 4-on-3 marker to tie RIT at one late in the first period. However, the Nittany Lions (2-5-0, 0-3-0 CHA) were unable to muster any further offense in a 4-1 loss to the Tigers (4-3-0, 1-2-0 CHA).

RIT got on the board first just 3:20 into the game. Katie Hubert, a freshman, collected a loose puck in the neutral zone, swooped in on Nicole Paniccia down left wing and scored off of the goaltender's skate. While the Tigers dominated throughout the early going - outshooting PSU 11-2 in the first 10 minutes of the game - the game hit a turning point thanks to a sequence of penalties. While the first of these was against Nittany Lions freshman Jordin Pardoski, the shorthanded work of Birdie Shaw drew a tripping penalty to RIT's Morgan Scoyne. Thirty-eight seconds later, Ariane Yokoyama joined Scoyne for checking, and Taylor Gross and Paige Jahnke took advantage of the open ice to feed Yoxheimer who popped it top shelf to level the game at the first intermission.


Penalties and power plays can be a cruel mistress, though. Often, whether through official intervention or simply due to the nature of the game, earning more time on the advantage during one stretch of the game is no guarantee that the trend will hold for 60 minutes. And the payback for the Yoxheimer goal and an unconverted power play early in the second was swift and decisive.

Consecutive penalties to Taylor McGee (hooking at 10:50) and Madison Smiddy (cross-checking at 12:24) emphatically ended the Nittany Lions' best fifteen minutes of the game and gave RIT a long power play with some 5-on-3 time mixed in. Just after the conclusion of McGee's penalty, Hubert added a second goal, from Lindsay Grigg and Erin Zach, to give the Tigers the lead for good. PSU got another chance to draw even with another late-period power play, but tight forechecking by Carly Payerl led to a turnover and an unassisted shorthanded goal by Zach. The Lions' third-period comeback attempts were abbreviated after a couple early power play chances, thanks to more penalties.

While the first two (of four to close the game from the 9:17 mark of the period) only caused harm in terms of the clock, the third led to a beautiful passing play - Yokoyama to Payerl, cross-ice to Tenecia Hiller - that sealed the result in RIT's favor. In all, the Tigers were 2-of-8 on the power play while Penn State was 1-of-8, but including the shorthanded goal in the calculations gives a more complete picture of special teams play in this tilt. Paniccia was typically solid in net, stopping 34 of 38 RIT shots while under consistent pressure.

Tigers coach Scott McDonald was happy with his team's efforts.


"We played with a high level of intensity," he said. "We competed for every loose puck and played hard all night. Defensively, we minimized their chances and neutralized their offense which kick-started our offense with strong transtional play. It's nice to get our first conference win and our effort has been rewarded."

The win was Tigers' first in the conference since joining the CHA (and NCAA Division I, of course) this season. Penn State will attempt to match that feat in a rematch Friday night at 7:30 p.m.
Posted by Kyle Rossi at 11:52 PM