Photos taken at the Penn State-RIT game Saturday night, as well as during a side trip to RIT's campus just south of downtown Rochester. Click to enlarge, as always.


RIT will open a new arena - the 4,150-seat Gene Polisseni Center - for the 2014-2015 season. They held a groundbreaking ceremony Friday afternoon, although there was no trace left of it and no marker to identify the arena site. However, according to RIT's website, the site "is directly south of the Student Alumni Union and adjacent to the existing athletic turf field." The Student Alumni Union is the shorter building in the right half of the picture and the turf field is just on the other side of the parking lot from where I'm standing. So I think I have it pretty well identified here. 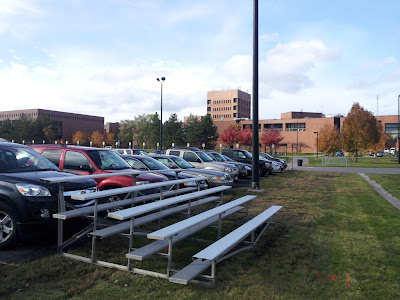 For now, RIT plays in Frank Ritter Ice Arena (other than the annual Brick City Homecoming games, of course), which holds 2,100 and opened in 1968. 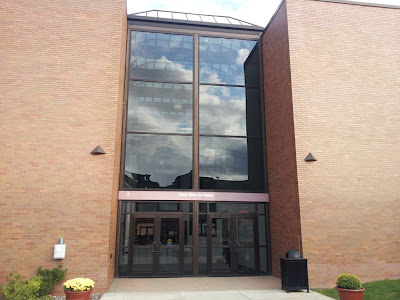 The Ritter is a solid looking hockey barn, although undersized for aspirations of major-program status. That's an alumni game taking place on the ice as part of homecoming weekend. 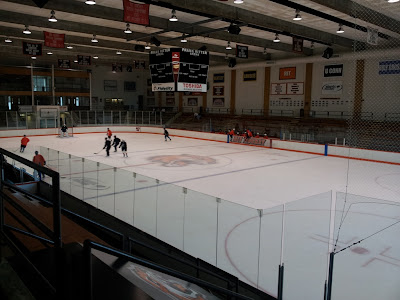 In the opposite corner of the rink from where I took the above picture is this glass case - the trophy for RIT's 2010 Frozen Four appearance is in the middle, and it's flanked by national championship trophies from 1983 (Division II) and 1985 (Division III). More than anything else it's the little things, like this Penn State banner in a row with the RIT women's program's other CHA rivals, that gives me those "wow, we're in the big time" moments. 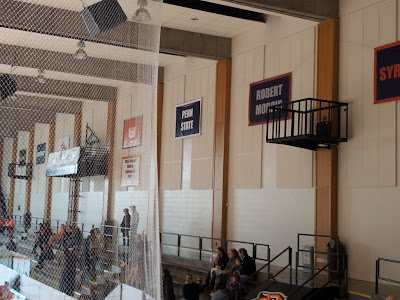 Men's head coach Wayne Wilson has an office on the ground floor of Ritter. 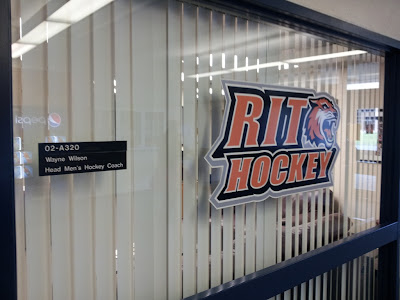 Tom Golisano, the man who sold the Buffalo Sabres to Terry Pegula, is an RIT trustee and has the College of Computing and Information Sciences named for him. He has also donated significantly towards the Polisseni Center. 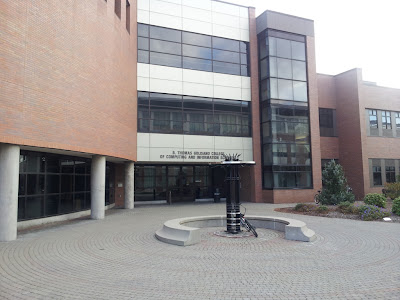 Orange and white balloons were on lamp posts all over what really was quite a nice campus. 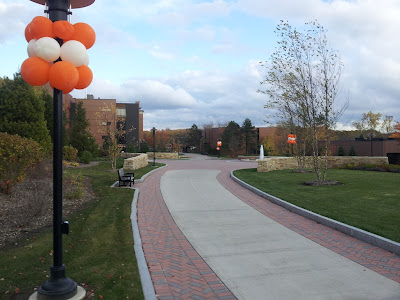 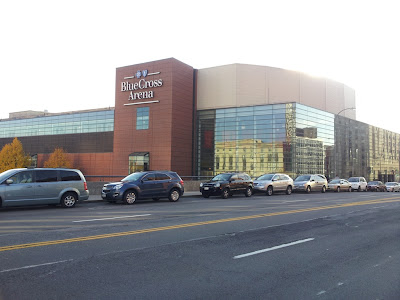 I caught this view walking between my car and the arena. Rochester looks like a beautiful city - I wish I could have spent more time there. 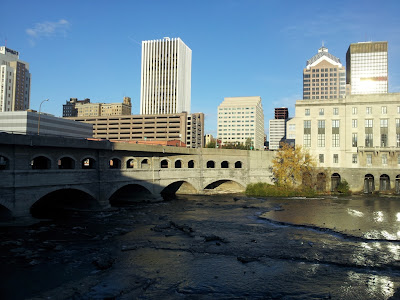 RIT's student section is called the Corner Crew because...well, they tend to stand in corners, whether at Ritter, Blue Cross Arena, or somewhere else. Here they are with the school's hockey band. By the way, if you can't read the scoreboard, this was taken 31 minutes, 47 seconds before the game started. The arena was almost entirely full long before that, however. 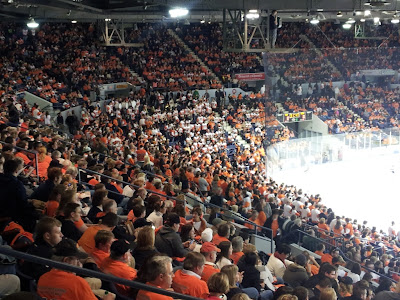 An overview shot to close things out, taken during the third period. 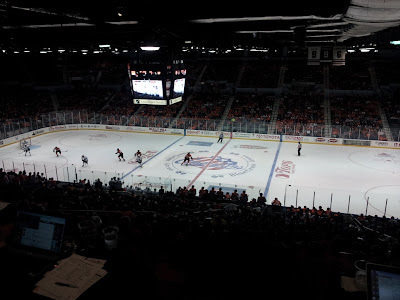 Email ThisBlogThis!Share to TwitterShare to FacebookShare to Pinterest
Labels: RIT