Do I put Joe Battista's column in the top three every single week? Sure seems like it. But why wouldn't I?

I've been very impressed with the work of both the men's and women's writers at the Collegian so far this season, including this feature on freshman women's forward Birdie Shaw.

So how does someone get to be known as "Birdie?"


Shaw was born Samantha Shaw but never went by that name. Shaw said her brother struggled to pronounce her name and it came out something like “Manta-bird.” Her father picked it up and kept referring to her as Birdie since she was three months old.

Is it just me or do a ridiculous number of sports nicknames start with a sibling mispronunciation?

Eventually, when it's needed (or when I'm less lazy about it), I'm going to write a post explaining the PairWise Rankings (often called PWR) for Penn Staters who are either new to college hockey or only familiar with the ACHA's coaches poll as a method for national championship tournament selection.

The essential knowledge, for now, is that PWR is an objective means used to award NCAA Tournament at-large bids. It takes every team in the country with an RPI over .500 (called Teams Under Consideration or TUC in PWR parlance) and compares them to each other in four different categories: RPI, record against other TUCs, record against common opponents and head-to-head record. The number of comparisons won by each team are then counted up, and the TUCs are then ranked in that order. Here's how that process stood after the games of this past weekend:


Penn State won 19 comparisons of the 25 possible (there are 26 total TUCs, I'm not showing all of them) to rank seventh in the country. So the Nittany Lions would be in the 16-team NCAA Tournament if the teams were picked right now.

As with many statistically-based endeavors, the PairWise relies on a sufficient volume of data, which simply doesn't exist at this point of the season. Basically, don't take it too seriously - and taking it at all seriously is "too" seriously - it's just for fun right now. But it is fun, so first star to that. 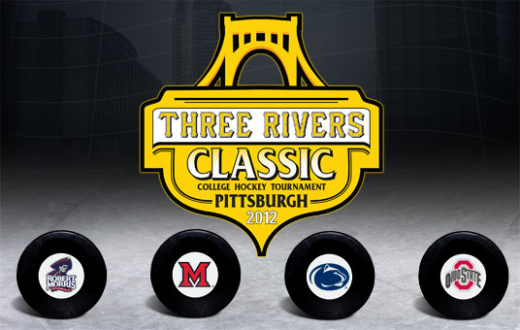 Well, the Three Rivers Classic has a logo. It's black and gold yellow and incorporates a bridge. Didn't see that coming.

PSU hockey dad Ed Olczyk was formally inducted into the U.S. Hockey Hall of Fame last Monday, as you probably know by now. He was joined at the ceremony by Dave Jensen, his linemate on the 1984 U.S. Olympic Team and yep, another PSU hockey dad. The third member of the line was a guy named Pat LaFontaine.

A quick Q-and-A with Matt Skoff regarding his experience starting the first game of the NCAA era. 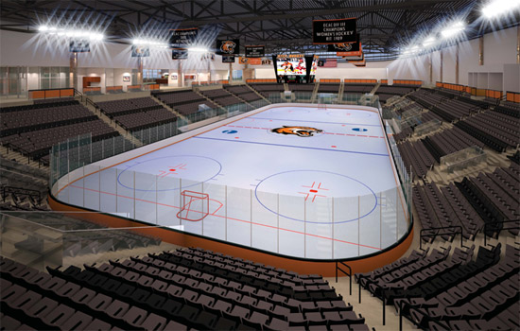 I've mentioned it a few times already, but one more (with renderings) won't hurt: RIT officially broke ground on their new arena on Friday afternoon, the day before playing (and losing to!) Penn State in their homecoming game. The Polisseni Center will open for the 2014-2015 season, cost $35 million and hold 4,150 fans.

UNO to seek $10 million from city, 'others' toward cost of arena
(Omaha World-Herald)

Meanwhile, UNO looks like they want in on the arena party as well, although they're still way back in the "get the money straightened out" phase of the process.

I stopped caring about this story at some point last week, but just to close the book on it (since it received an entry in each of the last couple Three Stars posts), Nic Kerdiles' season-long suspension handed down by the NCAA was reduced to 10 games on appeal. He's most likely staying at Wisconsin, as opposed to jumping to the WHL. Oh, and the issue may not have been the blurry photos of Kerdiles holding Sheetz coffee BioSteel tweeted by agent Ian Pulver, it might have been Pulver's paying for Kerdiles' hotel room at the NHL Entry Draft.

Nebraska's SBNation site generated a lot of buzz last week with this roundtable discussion on the possibility of the Huskers starting a DI hockey program which would, of course, play in the Big Ten. Spoiler alert: if you're looking for definitive answers, you're in the wrong place. If you're looking for as thorough of an exploration as you'll ever see on the issue, then click through.

In my opinion, Nebraska will get NCAA hockey eventually, but among Big Tenners, I think Ohio State, Indiana and Illinois are ahead of the Huskers in line.

2015 Penn State commit Alec Marsh assisted on this ridiculous goal (he's the center who kicks it wide to McLaughlin), which made SportsCenter's Top 10. SportsCenter, not SportsCentre, so you know it's legit.

We're very, very close to making what I'll call the Weekend of Face-Melting Awesomeness (DIII and DI national championships at the same site on the same weekend) official. Philadelphia, as a face-meltingly awesome city, is appropriately in line to host the inaugural edition.

Fortunately, PSU recruiting misses haven't come up too often to the best of my knowledge. However Michael Marnell, a forward with the USHL's Des Moines Buccaneers who has two points in six games so far this year (as a 17-year-old, it should be said), committed to St. Lawence last week after considering the Nittany Lions.

Know what would make my year? If Penn State joined numerous other hockey teams in producing a video in support of the You Can Play Project, which promotes acceptance of gay athletes in sports.

Thanks for reading
(Inside College Hockey)

Finally, Sunday night was a sad one for college hockey's internet presence, as Inside College Hockey - commonly called INCH - announced that it was shutting down full-time operations after ten years. The move, while unfortunate, was not particularly surprising. The site had struggled to produce fresh, consistent content for the last couple seasons, to the point where referring to the "Big Three" college hockey sites (as was generally done, with USCHO and College Hockey News being the other two) had become a little generous to INCH. Still, at its peak, the site was unsurpassed in quality, and its podcast was essential for college hockey aficionados.

The writers have set up a new site - inchwriters.com - which will continue to be updated with some content, although "posts (and podcasts) there may be sporadic, at least relative to what you’re accustomed to [on INCH]."
Posted by Kyle Rossi at 3:51 AM