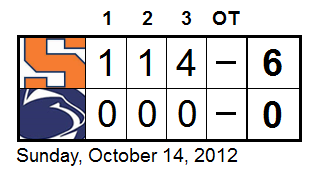 It could be argued that Penn State actually played better on Sunday than they did in Saturday's 4-0 loss. Certainly, PSU defended better in the first period, holding Syracuse to a 15-6 shot advantage after a 28-3 margin in Saturday's opening 20 minutes. Ultimately though, it was the dominance of SU's top line combined with their ability to make Penn State pay most of the time the Lions committed a penalty that swung this game.

While Laurie Kingsbury's even-strength snipe off of a turnover late in the first period opened the scoring, the 2-0 goal came from Melissa Piacentini's second-chance effort with Micayla Catanzariti in the box on a hooking call. Margot Scharfe made it 3-0 one second after a Jess Desorcie hooking penalty expired in the third period, and Holly Carrie-Mattimoe took advantage of Tess Weaver's tripping penalty at the 6:07 mark of the third period via a one-timer from from Scharfe in the left-wing circle. Kingsbury and Scharfe both added second goals late after the game had become more or less academic. In all, Syracuse was 2-for-5 on the power play, although in practice it's fair to call it 3-for-5 thanks to the first Scharfe goal.

Kallie Billadeau earned the shutout for the Orange in her first start of the season with a 20-save effort. Shannon Yoxheimer, who was on the other end of literally half of those saves, and Jordin Pardoski, who helped neutralize a decided SU size advantage, stood out for Penn State.