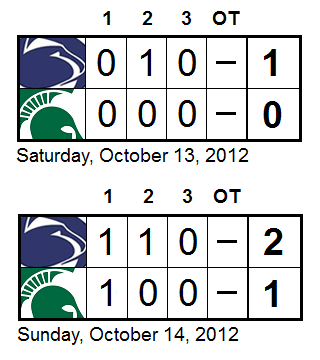 While the NCAA men's and women's teams were stockpiling a list of firsts at the Ice Pavilion and in Wilkes-Barre, the ACHA women collected a few of their own in East Lansing, MI over the weekend - most notably, a first win and a first sweep. Thanks to those pieces of history, the team is now 2-1-1 overall.

The victim was Michigan State, which managed only one goal on the weekend, thanks largely to Katie Vaughan's 13-save shutout on Saturday and Sarah Eisenhut's nearly-as-perfect start on Sunday. MSU's Amanda Tapp was also excellent in the opposite crease in both games, but freshman Devon Fisk, set up by fellow freshman Nina Elia, gave PSU all the needed offense on Saturday midway through the second period.

Fisk, clearly unfazed by a quick turnaround that saw PSU playing at 10:00 a.m. Sunday after Saturday night's tilt, also opened the scoring in the second game. The Spartans had an answer this time though, as just eight seconds into a slashing call to Tara Soukup, Dana Ovsjannikovova brought things level at one. Amidst an increasing amount of chippiness that led to 20 penalty minutes over the last 5:25 of the second period, junior captain Carly Szyszko restored the PSU advantage with 30 seconds remaining in that middle frame, and the Nittany Lions survived the final 17 minutes to hold on for the victory. 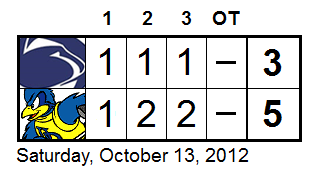 Brandywine transfer Peter Daley tallied in the first and third periods, while freshman defenseman Rob Fauth added one in the middle stanza to help keep the Ice Lions within striking distance before a Blue Hens empty-netter sealed the result. Chris Lewis and Neil Laessig each had two assists for Penn State, and Ryan DeMuth stopped 17 of 21 in net.

Stunningly, PSU now has more blemishes on its regular season record than it did though all of last season. While it's always a little disingenuous to point a finger solely at injuries, the fact of the matter is that with two vital guns on the shelf - Mike Broccolo (ribs) and Ryan Urban (shoulder) - the Ice Lions might simply be in survival mode for a stretch.

That stretch continues back at the Ice Pavilion, with a match against Virginia Tech on Saturday at 7:30 p.m.
Posted by Kyle Rossi at 12:02 AM