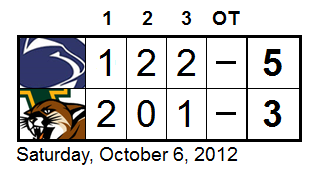 First off, I have to be completely honest about something. On Friday, when I posted...


It's going to be a blast no matter what happens, you can trust me on that much.

...I sincerely meant it. Even if Penn State lost its inaugural NCAA women's game 10-0, I still would have been thrilled simply with the opportunity to compete at the highest level of college hockey. I had no expectations whatsoever for this game - positive or negative.

But you know what? We won, and I sure ain't about to give it back out of some "just happy to be here" sentiment.

Given that this was the first game in program history, there is some important official business to address.

Opening faceoff: Won by Emily Laurenzi
First shot: Katie Zinn
First power play: 10:03 through 12:03 of the first period off of a checking penalty to UVM's Danielle Rancourt (not converted).
First penalty: Laurenzi for tripping at 13:01 of the first period. UVM's Brittany Zuback scored with the advantage to give the Catamounts a 1-0 lead.
First goal: Shannon Yoxheimer at 16:22 of the first period to tie the game at 1-1. Yoxheimer put home Taylor Gross' left-wing pass from a sharp angle at the far post. Laurenzi had the second assist.

There, of course, are numerous other firsts deriving from almost everything that happened during the game. None, though, are more important than...

First game and first win: 5-3 over Vermont, October 6, 2012. Credit Nicole Paniccia with the hard-earned decision in net, as she stopped 31 of 34 Catamount shots, many from close range and off of rebounds.


The win, in all honesty, was more about seconds than firsts though. Micayla Catanzariti became PSU's second goal scorer when she deflected home Madison Smiddy's point shot to even the game at 2-2 early in the second period. She gave the Lions the first lead in program history 14 minutes later from another dirty goal, this time from a rebound of a Birdie Shaw shot. Yoxheimer's second goal at 9:52 of the third period gave Penn State breathing room at 4-2 - which turned out to be vital when Emily Walsh pulled UVM back within one as the Catamounts largely controlled the last 10 minutes of the game. Shaw, who played an outstanding all-around game, made that a moot point when her heads-up play at the defensive blue line resulted in an empty-net goal for the final margin.

Here's the live blog with much more detail on an afternoon that will be remembered as long as hockey is played at Penn State: