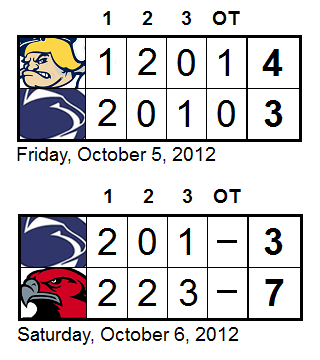 In each of the first two periods, the Dutchmen scored less than 60 seconds from the opening faceoff. The first tally, by Cole Bell, forced PSU to play from behind for most of the first period, a venture that ended successfully with late goals from Joe Zitarelli and Franky Reluzco. LVC then tied the game early in the middle period off of the stick of John Hagy II, and the teams traded goals later in the second to close out the game's regulation scoring.

Penn State killed off an overtime interference penalty to Mac Winchester to survive until a shootout, but Zitarelli's skills competition tally wasn't equal to LVC's pair.

The loss was the first in the regular season for the Ice Lions in nearly a full year, dating back to last October 9th, against SIU-Edwardsville at the 2011 ACHA Showcase. PSU, however, will get a chance for revenge on the Dutchmen on November 11th at Hersheypark Arena.

Counting that LVC game and heading into Saturday's ACHA Showcase tilt with Miami in Rockville, MD, the Ice Lions had lost just four times since the beginning of 2011-2012. Two of the four (the Dutchmen and Lindenwood on October 8, 2011) were against D1 opposition, and none of the four included a margin of more than two goals.

In light of that data, the RedHawks' blowout win qualifies as stunning. A wild first period saw Chris Lewis score both first and last to keep the game even after 20 minutes. From there, however, it was all Miami in a chippy match.

The Ice Lions, who surprisingly and suddenly find themselves at an early turning point in their schedule, play just once this weekend, on Saturday evening at MACHA rival Delaware. 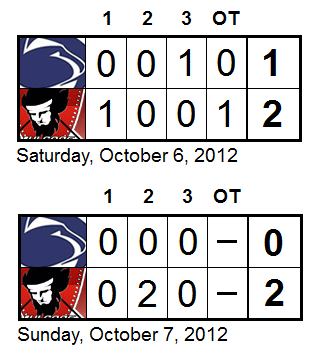 The women's ACHA Division 2 team (0-1-1) began its first season of play by being swept at California (PA).

Since it's all we have on Saturday's game, the first in team history, here's an excerpt from the recap on the Vulcans' site.


The Vulcans managed to get off to a great start in their opening game of the season. Just five minutes into the contest Angelica Smith scored the first goal of the season to give the Vulcans a 1-0 lead.

The scoring would come to a halt after Smith’s goal all the way until the 7:36 mark of the third period when Penn State tied the game at 1-1. As regulation play finished out neither team was able to break the tie as the game headed towards a five minute sudden death overtime period.

In the overtime Margo Laboon found the back of the net at the 2:04 mark to give the Vulcans their first ever win over Penn State.

Cal goalie Maria Sciacca made 24 saves in Saturday's game, then added another 34 and a shutout on Sunday. Katie Vaughan was great in the opposite crease in turning away 26 of 28 in the second game, but goals from Kelsey DeNardo and Alli Paratore proved the difference.

PSU will travel to Michigan State to battle the ACHA D2 version of the Spartans this weekend.
Posted by Kyle Rossi at 2:06 AM