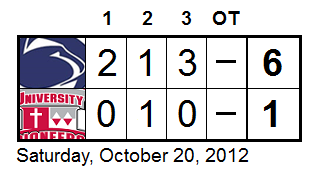 Josh Brandwene's primary goal this season is to improve every day, and for the team to be playing its best hockey of the season at tournament time.

Things like "better" and "progress" aren't always easily measured. In fact, as recently as Friday's series opener, I argued that a 2-1 loss to Sacred Heart could be considered forward movement. No rationalization is needed, however, when the Nittany Lions move from that defeat into a 6-1 win the next day to snap a four-game losing streak and improve to 2-4-0 (0-2-0 CHA).

The offensive explosion from a team that had only scored seven times in the previous five games (and just twice after the season-opening 5-3 win over Vermont) was thanks mostly to a suddenly-lethal power play. After going 0-for-19 to start the season, it connected three times in the first 32 minutes of the game to give the Nittany Lions more than enough offense.

That's not to say that the game didn't have a few tense moments, though. Taylor Gross and Shannon Yoxheimer scored on PSU's first two attempts with the advantage to give the Nittany Lions a 2-0 lead into the first intermission. However, early in the second period, and on a SHU power play...


Casey Stathopoulos (Waltham, MA) knocked in loose puck on a scrum in front of the net, set up by Sara Hanna (Lino Lakes, MN) and Sarah Delaney (Whittman, MA) at 4:03.


Penn State answered about eight minutes later, once again on the power play, as Jeannette Bateman knocked down a clearing attempt at the blue line and skated in for an unassisted goal at 12:00.

Jess Desorcie and Hannah Hoenshell tallied 26 seconds apart early in the final period to crack the game open, and Jordin Pardoski added a finishing touch with 1:39 remaining. Madison Smiddy and Jenna Welch each had a pair of assists in the contest.

Notably, Nicole Paniccia started in goal Saturday to break up what had been a straight rotation between her and Celine Whitlinger to this point. Paniccia didn't give Brandwene any reason to regret the move, stopping 25 of 26 Pioneer attempts.

While the flood of NCAA-era firsts has slowed significantly six games into the season, this game still provided a healthy share, including:
The Nittany Lions return to the Ice Pavilion Thursday and Friday for what should be a fascinating series with RIT, last year's NCAA Division III national champions who are also playing their first season at the DI level. The Tigers are 3-3-0 following a 3-0 win over Yale at Rochester's Blue Cross Arena Saturday afternoon, just before the PSU men upset RIT in the nightcap.
Posted by Kyle Rossi at 4:18 PM