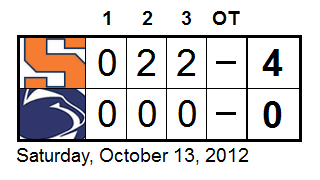 Nicole Paniccia was stellar in net with a career-best (and a PSU record, obviously) 53 saves, but Syracuse managed to get four pucks past her in a 4-0 SU win to spoil the Nittany Lion women's program's first NCAA home game and first College Hockey America game. Penn State is now 1-2-0 (0-1-0 CHA) while the Orange climbs to 1-2-0 (1-0-0 CHA) ahead of Sunday afternoon's rematch.

Paniccia was particularly outstanding in the first period, turning aside all 28 shots she faced to help PSU survive in a scoreless draw until intermission. Josh Brandwene and his staff adjusted well, however, and the Nittany Lions put together an fantastic second period - one in which PSU actually won the shot count, 14-13. However, almost as if the hockey gods were forcing PSU to repay a karmic debt built up during the first 20 minutes, Syracuse scored on two of those 13 to take all of the offense they would need back to the dressing room. Nicole Ferrara dented twine first off of a scramble in front at the 3:19 mark, and Melissa Piacentini added the Orange's second four minutes later. On that second goal, Shiann Darkangelo foiled a PSU rush at the line just as a Nittany Lion power play expired, then Caitlin Roach made a beatiful pass to get Piacentini in alone on Paniccia.


Darkangelo got her own goal in the third period when she finished a rebound of a Laurie Kingsbury wraparound attempt - a down-and-out Paniccia very nearly stopped that one by tossing her glove at it. Orange captain Holly Carrie-Mattimoe completed the scoring with an unnecessary final tally with 46 seconds remaining in the game.

Neither team converted on the power play during the game, with PSU misfiring on all six attempts and Syracuse finishing 0-for-5.