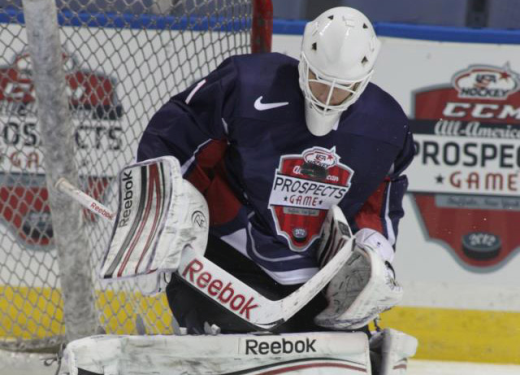 Goaltender Eamon McAdam, who is scheduled to join the Nittany Lions next season, has been selected to represent Team USA at the World Junior A Challenge, which will take place from November 5th-11th in Yarmouth, Nova Scotia. The WJAC is an annual tournament featuring most of the best Junior A players from five different countries (there are six teams in the tournament, as Canada is split into eastern and western sides) - this year, Switzerland, Russia and the Czech Republic will join the U.S., Canada East and Canada West in the tournament.

The American team, composed entirely of USHL players with the exception of EJHL forward Ryan Fitzgerald, will be pretty familiar to McAdam, as five of his Waterloo Black Hawks teammates also got the nod. They include defenseman Ian McCoshen and forwards Taylor Cammarata (committed to Minnesota for next season), Vince Hinostroza (Notre Dame), Justin Kloos (Minnesota) and Zach Stepan (Ohio State). Michael Bitzer of the Fargo Force, a Bemidji State commit, is the other goaltender on the team, and it will be interesting to see how head coach Brett Larson and his staff divides up playing time between the two.

Black Hawks coach P.K. O'Handley believes that playing in the tournament is a huge opportunity for McAdam and his teammates.


“A player can learn from an event like this, skating with top players from other teams and being coached by someone with a different voice. This is also a heavily scouted event and an opportunity for our guys to impress some influential people.”

For McAdam, this is just the latest of several prestigious honors in recent months. On September 29th, he played in the first annual USA Hockey All-American Prospects Game, a showcase for 2013 NHL Entry Draft hopefuls. He was named to NHL Central Scouting's draft watch list earlier last month, and won a silver medal while being named the tournament's top goaltender at the Junior Club World Cup in August. He's also off to a great start in the USHL this season, with a 3-0-0 record, a 1.33 goals against average, a .961 save percentage, and his first shutout in the league on Friday against Sioux Falls.

Team USA will play an exhibition game vs. Canada West on November 3rd before beginning the tournament in Pool B with Canada East and Switzerland. Following a round robin, each team will move on to the championship round, with the two pool winners receiving a bye to the semifinals and the remaining teams playing each other for the other two semifinal spots.

Here's how the U.S.' schedule stacks up:

All games will be streamed on FastHockey.com.

Despite being new to NCAA Division I, Penn State already has a decent amount of history with the WJAC. Last year, PSU freshmen Curtis Loik and Luke Juha were integral parts of Team Canada West's gold medal win. In 2010, Reed Linaker scored two goals in five games for Canada West but finished a disappointing fourth, while Juha won silver with Canada East.