It was a pretty light week for Penn State's ACHA teams, as only the men were in action - and only for one game, a Saturday night home tilt. 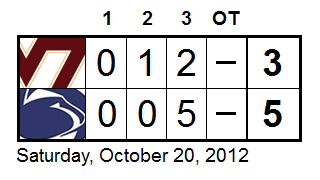 A five-goal third period explosion turned what had been a lackluster 40 minutes and a 1-0 deficit into a possible statement win, 5-3 over Virginia Tech.

The Ice Lions, now 5-2-1 (2-0-0 MACHA North), had lost three of the previous four outings - one of which was in a shootout - making the third period against the Hokies particularly vital to getting the season back on track. Until that last stanza, Kevin Peak's second period shot past Kevin Lowthert was the game's only scoring. However Mike Broccolo, Joe Spagnola, Mac Winchester and Fredrik Linge all got on the board in the first 9:07 of the third to give Penn State a suddenly-comfortable 4-1 lead.

VT's Alex Smith scored twice in that last period, once on the power play to cut that lead to 4-2 and once more with 2:30 left for the game's final goal, but in between those efforts, a Taylor Vincent breakaway kept the game from creeping back into doubt.

For PSU, Lowthert made 37 saves on 40 shots, while Winchester, Vincent and Broccolo all added assists to their goals to finish with two points each.

Next weekend will be another one-gamer, with the Ice Lions hosting Saint Joseph's Saturday afternoon at 1:00 p.m.

As mentioned, the women (2-1-1) were off last weekend. Their next game is November 3rd at Maryland.
Posted by Kyle Rossi at 3:07 PM