The decades-long wait for NCAA Division I men's hockey at Penn State ends tonight. And yes, I got chills typing that sentence.

I'll be honest though, I probably haven't done an adequate job setting the stage for this moment in history. In hindsight, I wish I had involved some sort of countdown, a more extensive package of preview-type posts, or something along those lines. That cliche about seeing the trees, but not the forest, describes the situation well, as I tend to get wrapped up in the day-to-day minutia without taking a sufficient number of steps back from that.

Possibly because of that, in a lot of ways, none of this feels all that different to me as I write this. Last year, the Icers opened up against Lebanon Valley College, a former NCAA DIII program that moved to ACHA Division 1. This year, the Nittany Lions open up against American International College, a similarly downtrodden program with a similarly low profile to most people. The PSU roster, in some respects, isn't substantially different - that massive bloodbath of Icers most of us predicted for the inaugural DI team never really came to pass. The primary coaching staff is the same. I'm doing the same things to prepare for the game, and I'm going to cover it the same way. The rink, of course, is the same. Many of the people who will fill it tonight are the same. In general, there's been that same sort of progression from the end of the previous season to the start of this new one: schedule release, roster release, a handful of new recruiting commits, pumping up whatever "news" turns up in July.


One of the reasons I started this blog, maybe the primary reason, was an interest in obsessing over Penn State's transition to Division I. I was in Hockey Management Association as an undergrad and remained a close follower of the Icers out in the real world. I never imagined that this day would arrive through any of that and was pumped beyond belief when, seemingly out of nowhere (from my perception on the outside, at least), some previously-unknown hydrofracking billionaire shows up to pay for the whole thing. I didn't want to miss a moment of the process, and figuring a blog would be a good way to keep up with things, I fired up TYT about a month after the donation announcement.

I think, more than anything, what I've learned about the transition process is that there's no obvious moment where you can declare the transition complete. It is, after all, a process. A slow process that largely goes unnoticed if strict attention isn't given to it. Sure, there are a few obvious moments of punctuation like the hiring of coaches, or the arrival of the first DI-ready recruits. The construction of the Pegula Ice Arena helps us mark progress as well. But largely, the rhythms of the season and offseason pass as they would have even if it was an Penn State ACHA season opening tonight. I've taken several opportunities over the last year and a half to declare the DI era officially underway, as if it's something that can be pinpointed, and they've all been false alarms in some way or another. Even declaring the transition finished tonight, as I've done in this post's title, might be a mistake. After all, the Nittany Lions are playing what could be described as a transitional schedule this season, and some seem to point to the 2013-2014 opener at the new arena and as a Big Ten member as the "real" opening. It's all about interpretation.

At the same time, this is decidedly different. We all know that. When Penn State plays AIC tonight in the Ice Pavilion at 7:30 and tomorrow night in Wilkes-Barre at 7:00, it will do so as an NCAA Division I program opposing another NCAA Division I program. No matter how you wish to slice the larger significance of the games, the meaning of this inaugural season, the transition or the opponent, it's unprecedented. Penn State hockey is on the big boy scoreboards now. 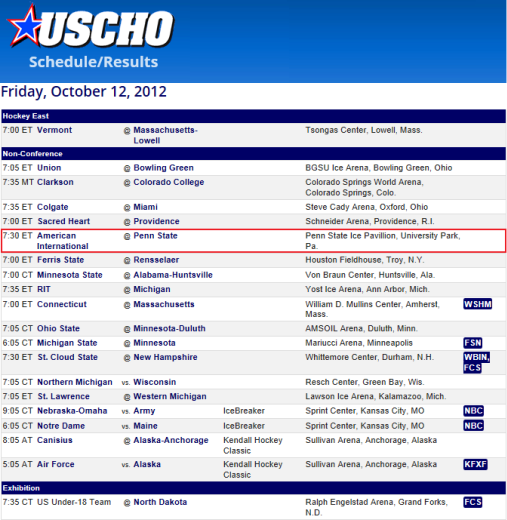 Okay, I just gave myself chills again, so my head's back in the right place. But what's left to say at this point? I really have no clue. So I'm just going to type extemporaneously for a while, slap some subheads on after the fact, and hope you don't hate it. Sound good?

Guy Gadowsky refuses to define this season by wins and losses, preferring instead to ensure that the foundation is laid for future success. I unconditionally support that approach. Really, more than anything, I'm curious to see what we have in this team. I want to see Gadowsky's trademark fast-break style played with hulking power forwards like Jonathan Milley, Casey Bailey and Max Gardiner. I want to see what should be a well-balanced defense that includes the highly-intelligent puck movement of Luke Juha and Nate Jensen with the physicality of a Mark Yanis or a Joe Lordo. I want to see how a bunch of players who had no idea that they'd even have a chance to play NCAA DI hockey when they came to Penn State adjust. All of that, in my mind, is independent of wins and losses.


But, that said, they will be keeping score in this games, and they will be counting the number of times the Nittany Lions have more goals on the board than their opponents. So, with the full understanding that it doesn't really matter this season (or next season either, to be blunt), I still think it's warranted to present an official guess at how PSU will do in this inaugural campaign.

I don't pretend to be some sort of talent evaluation expert, but based on what we know about the players on the team, their recruitment and their performance at previous stops, I think that this year's Nittany Lions will be roughly equal to a middle-of-the-pack Atlantic Hockey team. You can translate that a few different ways in terms of the final record, but for the sake of discussion and just to get a number out there, wins over the ACHA and NCAA DIII teams on the schedule, losses against the major-conference programs, and splitting the AHA, Alabama-Huntsville and NTDP games yields something like 17-14-4 (I arbitrarily threw some ties in there).

Really though, anything even approaching 15 wins would be fantastic, keeping in mind that we're playing 10 ACHA or DIII games. I also would like to see some sort of upset win over either a major conference program or a top AHA team like Air Force or RIT as sort of a definitive season highlight moment. As things sit right now, I'm keeping my eye on that January 19th game against Vermont in Philadelphia as one upset possibility. Hockey East's Catamounts were a dreadful 6-27-1 last year and endured an absolutely brutal offseason in terms of player and coach departures, as well as recruiting losses (most notably, superstar commit Zemgus Girgensons, who signed with the Buffalo Sabres in July).

Given everything I just said, and beyond the fact that the men's program is playing actual, for real NCAA Division I games, American International College is actually quite a compelling opponent.

The Springfield, MA-based school with an enrollment of 1,200 has been playing hockey since two seasons after PSU dropped its first varsity attempt. Don't confuse "been around for a while" with "steeped in tradition," though. AIC has spent much of its history in NCAA Division II, but when DII was eliminated for hockey in the late 1990s, they moved up to DI and the Metro Atlantic Athletic Conference, which later became Atlantic Hockey when it broke away from the MAAC, an all-sports league.


In 14 seasons as a DI conference member, the Yellow Jackets have finished better than third-to-last exactly once, 1998-1999 when they were 5th of 8. From 2003 through 2011, AIC finished in the AHA cellar eight seasons in a row. They haven't posted double-digit wins since the season before that streak started, 2002-2003. There's really no way to sugarcoat it: if not for UAH and their understandable struggles as an independent, we're probably playing the worst program in DI. I firmly believe that these games were scheduled to give the Nittany Lions the best possible chance of winning the inaugural game (without resorting to a lower-level opponent).

That's not to say that there aren't reasons for optimism at AIC. Last season, long-time coach Gary Wright finally snapped the team's run in the cellar by finishing ahead of both Army and Sacred Heart. Among their eight wins was a 3-0 shutout at Brown, and they also pushed a resurgent Michigan Tech program to the limit, losing a pair of road games by a combined three goals to open last season. AIC lost at eventual Frozen Four team Union 5-2. Okay that's not much, I know, but it still gives at least an indication that the Jackets might finally be developing into something other than everyone's whipping boy.

Here's a highlight video of last season's efforts that includes clips from those games:

On the ice, the Jackets are a veteran team led by a trio of standout seniors, one from each position group. Forward Adam Pleskach scored 16 goals and 30 points, both team highs. On defense, California native Jeff Ceccacci is undersized at 5'9", but very effective offensively, averaging about half a point per game for his career. Ben Meisner, a senior who posted a highly-respectable (considering his team's competitiveness) 3.37 goals against average last season, is the expected starting goalie. A small freshman class is headlined by Colton Cyr, who spent part of last season with Juha on the BCHL's Vernon Vipers and is the nephew of former Hartford Whaler Paul Cyr.

So really, in my view, these first two games will finally, after a couple years of speculation, help everyone ascertain where exactly Penn State sits in year one, game one. They're measuring stick games against a program few would consider a measuring stick. But for a PSU team that desperately needs to be measured (don't tell Gadowsky I said that), these games will do better than most - a DIII win or a waxing at the hands of a Wisconsin (or similar) wouldn't really tell us very much, after all.

Of course, the question of whether the Lions can beat a team that aspires to the middle of the AHA standings is secondary to the fact that win or lose, Penn State is now an NCAA Division I program.

And there's those chills again. Enjoy the games, I know I will.
Posted by Kyle Rossi at 1:11 AM