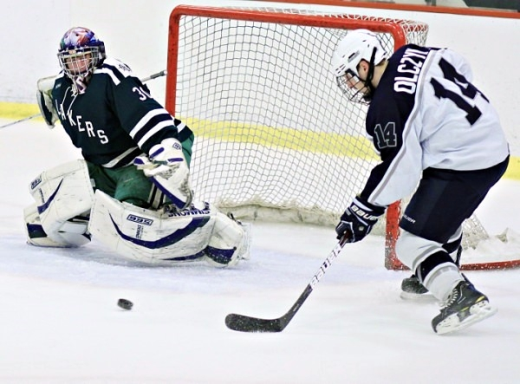 Tommy Olczyk has been named the first men's captain of the NCAA era, with defenseman Nate Jensen and forward George Saad serving as alternates.

Here's most of the release, meet you on the other side.

The trio, who was selected through a team vote, will lead the Nittany Lions during their first NCAA Division I season in 2012-13. Penn State will open competition at home against American International College Oct. 12.

"Tommy, George and Nate are three outstanding student-athletes who were selected by their teammates for their strong work ethic and commitment to the program," said Gadowsky. "They are fantastic representatives of Penn State Hockey, and the staff is extremely excited to have them lead the team during our first NCAA season."

A Long Grove, Ill., native, Olczyk played for the Sioux City Musketeers of the United States Hockey League for four seasons (2007-11) before playing with Penn State's club team during the 2011-12 campaign. With Sioux City in 2010-11, he garnered the league's Curt Hammer Award, presented to a player who distinguishes himself both on and off the ice by demonstrating outstanding performance skills, pride and determination.

One of five skaters with NCAA Division I experience, Jensen joined Penn State after playing the 2010-11 season at Mercyhurst. The blueliner appeared in 36 games with the Lakers and ranked second among the team's defensemen with 16 points (2g, 14a). The Shorewood, Minn., native spent the 2011-12 season as a member of Penn State's club program.

Saad, who joins Jensen as an assistant captain, was a three-year member of the University's club team and collected 66 points (34g, 32a) in 80 career games. The Wexford, Pa., native played with the Youngstown Phantoms of the North American Hockey League prior to his arrival at Penn State.

The preseason timing of this announcement and the method of selection contrasts heavily with last season, when Gadowsky waited until late January of his first season as coach before naming then-senior defenseman Dan Loucks captain. Loucks followed 2010-2011 captain Marek Polidor. Interestingly, senior forward Eric Steinour has worn a letter before (an A alongside Polidor) but was not selected for one this season.

It's pretty hard to argue with any of the selections though, particularly when it was left to a team vote. It would be easy to write off Olczyk as a product of his last name, but the fact is that he was consistently selected as a team spokesman and leader before making it official today. Speaking through my experience as a member of the "media" (haha), he's well spoken, intelligent, accountable, has a good head for the game and demonstrates natural leadership abilities. Sure, he's a sophomore, but he's also going to turn 22 on November 10th, so that doesn't really matter. Olczyk was an alternate captain in the USHL with the Musketeers for the 2010-2011 season.

Jensen also has a proper captain's demeanor, and is also a highly intelligent defenseman. He likes to join the rush, but unlike many blueliners who do, it's almost impossible to catch him making a mistake in judgment. The fact that he's played NCAA Division I hockey before is also an obvious asset. PSU will undoubtedly run into many new and different situations as a team this season, and will likely look to Jensen (along with fellow now-and-former DIers Max Gardiner, Taylor Holstrom, Bryce Johnson and Justin Kirchhevel) for guidance.

As with the women's team's selection of Lindsay Reihl as an alternate, it's nice to see an "ACHA original" like Saad get the nod. He was really one of the unsung heroes of last season for his development into one of the team's top all-around forwards.
Posted by Kyle Rossi at 3:15 PM