For the second straight week, University Park's ACHA teams had a light slate, with only one combined game. 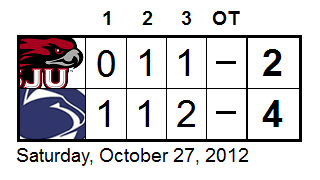 Franky Reluzco led the way with two goals and an assist, and Neil Laessig added a trio of assists as the Ice Lions (6-2-1, 3-0-0 MACHA North) put together a second straight win, 4-2 over Saint Joseph's.

Despite Penn State's scoring exploits, the story of the game may have been Hawks goalie Kyle Van Osten, who turned aside 54 of 58 shots to keep the game close despite the ice being heavily tilted towards his end for almost the entire evening. On the other end, Teddy Steinhart only saw eight SJU attempts in recording his second win of the season.

Reluzco and Laessig both helped see to it that PSU got enough past Van Osten to win though. The pair assisted on Peter Daley's goal just 1:51 from puck drop that got Penn State off on the right foot. Daley returned the favor late in the second period by setting up Reluzco on a vital goal to answer a Hawks power play tally and make the score 2-1. Mac Winchester and Reluzco both scored in the third period to cancel the Hawks' Matthew O'Brien's attempt to pull his team back in it.

The Ice Lions get back to a heavier workload this coming weekend through a road trip to New Jersey to take on Monmouth on Friday and Rider on Sunday.

Maryland looks to be a tough opponent - the Terps beat Virginia 8-4 and Liberty 4-0 their last two times out. Saturday's result may also prove important to the first set of rankings, since this will be PSU's last chance to impress the voters before their release. Speaking of "last," it's also the end of five consecutive road games to start the season before the team makes its Ice Pavilion debut on December 14th.
Posted by Kyle Rossi at 2:37 AM