3. Joe Battista: Are you Ready for Some Hockey? Some NCAA Varsity Hockey?
(statecollege.com)

I've said it before, I'll say it again - even if you don't care at all about Penn State hockey, you're not a human being if you're not ridiculously happy for Joe Battista, the man who is finally seeing his dream of a quarter century materialize.

The Josh Brandwene story has always been a little fascinating to me. I remember him coming into the Ice Pavilion as an opposing coach, including his tenure at Delaware, when visits tended to coincide with alumni weekend as both he and Blue Hens assistant John O'Connor are former Icers. Obviously, I knew he was a great defenseman at PSU in the day, although I'm thankfully not old enough to go back that far. And, I'll be honest, once he left the ACHA for the New England prep circuit, I didn't really expect to cross paths with him again. His hiring blindsided me, even though it actually made, and continues to make, perfect sense.

On a related note, it looks like the Collegian has every intention of covering women's hockey for seriously this season, which is great to see.

I more or less ignored the goings-on Friday night - I viewed it more as PR than as important news I needed to drop everything and post about to be perfectly honest - but just to be thorough, the men's team did in fact open official practice with a midnight event. A few hundred people, or roughly 75 percent of the rink's capacity, were there according to PSU media rock star Ben Jones, who is responsible for the above video. Solid crowd, although I'll admit that I cringed when College Hockey News retweeted a photo of a mostly-but-not-completely full Ice Pavilion with the PSU hockey account's description calling it an "awesome turnout." Some Minnesota, Wisconsin or Michigan fan undoubtedly saw that and thinks we're all idiots.

Penn State: Highly-engaged student body for most athletic events, tons of school pride...but not anywhere close to where it needs to be as a hockey school yet. That's my position until it's proven untenable. The good news is that I think it will be at some point over the next couple years. 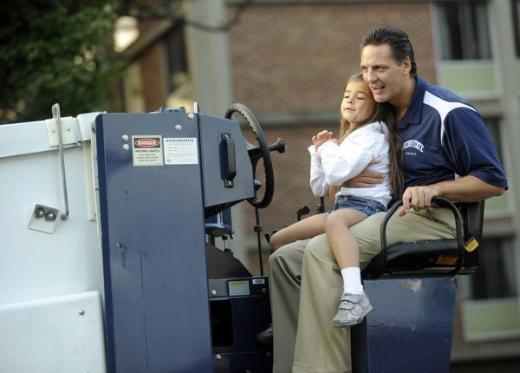 Also on Friday evening, the PSU homecoming parade (featuring Terry and Kim Pegula as Grand Marshals) included a float jammed with the men's hockey team decked out in the new home jerseys and yes, Guy Gadowsky on a Zamboni.

This is sort of a filler article, but I threw it in because it actually gives hard numbers on ticket sales, which passes the interesting-ness test for me.


Student ticket sales indicate he’s right, with 799 five-game packages and 273 full season tickets sold as of last week. (Only season ticket holders from last year were allowed to get them in 2012-13.

Penn State will play this season at the Greenberg Ice Pavilion, which holds 1,350 people. The Nittany Lions have 16 home games and open against American University Oct. 12.

Two of the three student ticket packages, which cost $20, are sold out, and the third had few remaining last week. The five-ticket packages were designed to triple the number of people who get to see games,” said Joe Battista, associate athletic director for ice arena and hockey development.

Battista said the rink will sell 300 standing-room-only tickets for each game. He said there aren’t any plans to change the rink to fit in more people, but he expects it to be loud and provide the team with a definitive home-ice advantage.

With the season in full swing starting this week, the "preview period" has expired, but not before this one (as well as the several that follow) got their stuff in just under the wire. Because I don't think he gets enough attention, here's a quote on freshman defenseman Luke Juha from Gadowsky contained in this one:


“Luke has a great hockey IQ, a great offensive mind and he sees the ice really well,” Gadowsky said of Juha. “He’s player that’s really fun to watch. And people that really appreciate hockey will love watching him. I think Luke will be a great college defenseman. He likes to control the play from the back end and he just has the desire and the skill that will help us. So we’ll be relying on Luke a lot from the start.”

Friend of TYT IcersGuy checks in on BSD with a nice summary of how things stand in our shared domain.

The women's team hasn't gotten much love from this season's CHA previews, as everyone I've seen make CHA picks went with an identical sequence (with one single exception breaking ranks and going Robert Morris first over Mercyhurst), one that has the Nittany Lions pegged for last place. I'm not promising anything, but I don't think it will be quite that easy - I happen to believe PSU, Lindenwood and RIT will be pretty close to each other this year.

Penn State and the commonwealth both receive quality mentions from CHI.

Just ahead of the first games in club history, the new women's ACHA team announced its letter-bearers. I can't think of a more deserving choice for captain than Carly Szyszko, who once played goal for the Lady Icers while both of the team's regular netminders (Heather Rossi and Katie Vaughan) were in Turkey for the 2011 World University Games.


This article, while heavy on Penn State content intended to be positive, really bothers me for a couple reasons.

The controversy surrounding its football program and a massive cover-up carried out by a region's most beloved figure still pervade the entire university.

Oh, okay. "Massive cover-up carried out by a region's most beloved figure?" Care to substantiate that statement? Oh right, you can't (and no, Louis Freeh's executive summary doesn't count, sorry).

Forgetting about that (I don't really care to get into it further right now, hockey is my escape from that mess), the whole "PSU hockey opening up under a black cloud" storyline, while it makes for good copy, is complete trash, a construction of lazy journalism. Speaking as someone who communicates with program personnel on a regular basis, I can promise you that The Scandal simply doesn't register in hockey on any substantial level. Other than a few dicey moments last November and December - some public knowledge, some not - I can't point to a single instance where something happened differently than it would have if Jerry Sandusky had never been born (I wish).

CHN did speak with Gadowsky back in July, and therefore had a chance to make that assessment for themselves, but instead were more concerned with generating a story by badgering him into admitting that he cares about his kids. Still think they know more than I do? You're allowed...then again...


Independent and ineligible for postseason play...

Well-researched as always, CHN. You know what I did when I wasn't sure whether PSU was eligible for postseason play? I asked. So did your chief competitor, USCHO, back in April. You, on the other hand, did as you normally do and guessed at it. You want to know why nobody takes you seriously next to USCHO? I've hit on most of it here, but just to summarize: rumor mongering, artificial generation of "controversy," opinion pieces at about a 20-to-1 ratio to news reporting, sloppy fact-checking, douchebag "reporters." I think that about covers it.

If you're asking me to get teary-eyed when a top recruit of one of PSU's toughest opponents throws his NCAA eligibility into jeopardy by tweeting photos of himself with agents at the NHL Entry Draft...yeah, that's not going to happen.

Mike McMahon (easily among the best college hockey writers out there) broke the news that Merrimack, which was found to be at a pretty severe Title IX deficiency, may add hockey as one of six women's sports meant to balance things out. Can't say that I approve of how they got there, but hey, more hockey teams. Sweet. 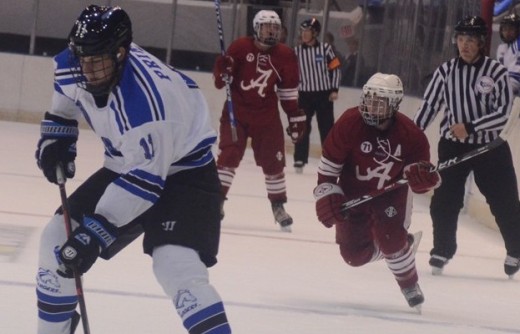 In all seriousness, speaking as a fan of an ACHA program that had trouble getting NCAA games for years, much respect to the Chargers for giving Bama the opportunity. Yeah, I know they don't have to worry about game limits as most do and will take any fixtures they can get, but still.

It really fascinates me that they're building an ice rink on a baseball field in Williamsport and leaving it there all winter. Not only that, but it's apparently going to get pretty regular use beyond the Federal Hockey League franchise that just relocated to the city.

Directional Michigan ACHA programs: still horrible at not getting busted for hazing. Back in 2003, it was former Icers rival Eastern getting a four-year hammer, which was eventually reduced to the balance of the 2003-2004 season, as well as a postseason ban in 2004-2005 and probation through 2007. The Eagles, formerly one of the best programs in ACHA D1, haven't been the same since.
Posted by Kyle Rossi at 12:18 AM