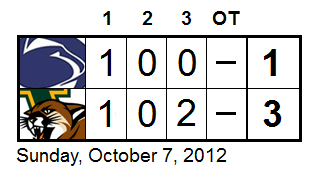 It might be hard to see things in a positive light after what has to be considered 60 minutes of Catamount domination, but it really wasn't all bad. Through two games, I've been extremely impressed with Birdie Shaw at both ends of the ice. Paige Jahnke has proven a very capable puck mover. Shannon Yoxheimer is a dynamic offensive talent. And perhaps most of all, at least today, Josh Brandwene looks to have a legitimate high-end stopper in the form of Celine Whitlinger. The Gilmour Academy product turned aside 40 shots with the sort of effort that will surely come out on the other end of plenty of decisions down the road.

However, PSU did spend most of the first 40 minutes chasing Vermont around their defensive zone (to the tune of a 30-11 UVM shot advantage through two periods, part of a 43-19 final count). The pattern was improbably interrupted midway through the first when Shaw put home a fortunate rebound of a Taylor McGee shot, decidedly against the run of play. After plenty more intense pressure, the Catamounts leveled the score with 3:01 left before the first intermission when Klara Myren buried Meghan Huertas' 2-on-1 feed off of a PSU turnover.

The third period was actually the best of the game by Penn State, despite what the line score says. Yoxheimer had a couple of quality attempts on Catamount goalie Kelci Lanthier early on, including during a well-executed PSU power play off of a Gina Repaci interference call. Things fell apart rapidly, however, when the advantage ended with a McGee checking call. On the subsequent faceoff, Danielle Rancourt deflected Megan Dalbec's shot past Whitlinger for the eventual winner. PSU did have chances to get back to even, including one last power play, but Huertas - sprung by a beautiful Myren pass - sealed the Lions' fate when she buried a breakaway goal with 1:56 left.

Here's the live blog from the Penn State's first-ever NCAA loss. The Nittany Lions, of course, will play their first home and CHA series next Saturday and Sunday when Syracuse visits the Ice Pavilion.