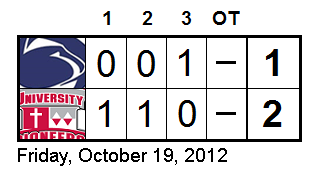 There are hard lessons to be learned as a new-to-Division I program with 17 freshmen. One of those lessons is that progress doesn't always look like progress. Sometimes it looks like losing to a Sacred Heart team that the ACHA's Lady Icers defeated nine months ago.

That's not snark. That is, in fact, the process. In a bizarre way, it's growth. Why is it growth? Well, try this on for size: for the first time ever, the Nittany Lions were favored against a DI opponent. From the available accounts, it seems as if PSU (1-4-0, 0-2-0 College Hockey America) outplayed the Pioneers (3-2-0), growing stronger as the game went on. A hot goalie was involved, as SHU's Alexius Schutt stopped 41 of the 42 shots she faced.

In other words - and again, relying on the recaps and box score without archived video or anything else available - it feels a lot like a game Penn State should have won, but didn't. "Should have won" qualifies as uncharted territory, and therefore growth.

The Sacred Heart recap gives plenty of detail on their pair of goals.


Alanna Woodford (Scituate, MA) gave SHU the game's first lead with a nifty deflection in the low slot on a blast from the right point by Alex Davis 2:22 into the game.  The Pioneers held the puck and moved it well during a delayed penalty, with Catie Ladner (Chaska, MN) taking it around the net from the near corner and feeding it to the blue line for Davis.

Sacred Heart waited until 15:42 of the second to strike again on a power play goal by Sara Hanna.  Melissa Robbins (Nashua, NH) and Natasha Klinoff (Concord, MA) picked up the assists, sending Hanna in for a drive to the net.  After Nicole Paniccia stopped her initial shot, Hanna knocked in the rebound for what would prove to be the game-winning goal.

Penn State turned up the pressure after falling behind 2-0, including a 17-5 shot advantage in the third period. With Paniccia pulled for an extra attacker at the 17:29 mark of the final stanza, Shannon Yoxheimer knocked home a loose puck at the front of the goal. Birdie Shaw and Taylor Gross were credited with the assists. Yoxheimer, not surprisingly, is the Nittany Lions' early goal scoring leader with three (Micayla Catanzariti and Shaw, with two each, account for the rest of PSU's scoring so far).

Beyond the point collectors, Emily Laurenzi, Jordin Pardoski and Madison Smiddy also finished the game with a +1 rating thanks to the late tally. According to the Penn State recap, Jess Desorcie stood out with an outstanding 13-3 record on faceoffs.

Josh Brandwene made few changes to his team from last weekend against Syracuse, although he did tinker with the defense by dressing Smiddy in favor of Taylor McGee. Smiddy partnered with former Honeybaked teammate Pardoski, while Jeanette Bateman stayed on the right side, except with Paige Jahnke on her left.

PSU has a shot to salvage a split with the Pioneers Saturday afternoon at 2:00 p.m. before returning to the Ice Pavilion to face fellow DI and CHA newcomer RIT on Thursday and Friday.
Posted by Kyle Rossi at 3:57 AM