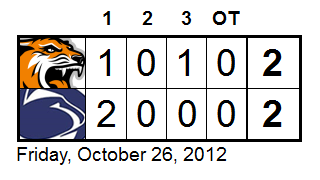 Oftentimes, the team that scores last in a tie feels like they won, while the team that surrenders that final goal takes the game as a psychological loss.

I can't speak for the team, the coaches, or anyone but myself for that matter, but I don't carry that mindset at all, despite Tenecia Hiller's late spin-and-fire goal off of an uncleared loose puck that cost the Nittany Lions (2-5-1, 0-3-1 CHA) a regulation win with 1:29 left. In my mind, that doesn't negate a performance by Nicole Paniccia that eludes appropriate description. The junior Connecticut transfer stopped an unreal 59 of 61 Tiger attempts (both numbers are records in Penn State's young NCAA history), and suffice it to say that many were of the spectacular variety, with some even rising to "I can't believe that didn't go in" status. If she's not the CHA goaltender of the week when the awards come out Monday on the back of that performance, PSU should consider pulling out of the conference.


Hiller's goal also does not negate a gritty performance from Penn State's forwards. At the risk of excluding deserving candidates, because they can be found all over the roster, Hannah Hoenshell, Jill Holdcroft, Birdie Shaw, Micayla Catanzariti, Tess Weaver, Emily Laurenzi and Kendra Rasmussen all stood out to me. Significantly, these are not players without offensive upside, just ones who are understanding of a cold reality: at this stage of Penn State's program development, the Nittany Lions can't afford to be out-gutted or to mail it in defensively. They weren't and didn't. Timely shot blocks, sticks in passing lanes and disciplined aggressiveness were all in large supply from the listed players and others as well. Paniccia's task certainly wasn't easy, but it also could have been a lot harder against the senior-laden NCAA Division III champs from last season.

Of course, barring a shutout, defense, goaltending and guts by themselves can't earn points. With that in mind, the duo of Shannon Yoxheimer and Taylor Gross, who came out flying to start the game, provided enough offense to give PSU its first tie, home point and CHA point in the NCAA era. First, Gross deposited a loose puck generated by Yoxheimer's shot from right point on an early power play to give Penn State a surprising 1-0 lead 7:43 into the game. Just 23 seconds later, it was the Michigan native's turn to get the goal after Gross' attempt from behind the net ended up out in front. Jess Desorcie, playing on a line with the two goal scorers picked up an assist on one while defender Madison Smiddy helped on the other.

However, thanks to some substitution miscommunication at the end of a Catanzariti cross-checking penalty late in the first, RIT was able to halve the PSU lead when Lindsay Grigg took advantage of some extra ice and found Celeste Brown, who beat Paniccia.

Following that goal was a familiar pattern: long stretches of territorial disadvantage punctuated with sudden bursts of offense. Holding serve in that fashion for the last 43:18 of the game, while hardly optimal, would have completed the task. Unfortunately, Hiller and her teammates had other ideas, outshooting PSU 31-9 over the third period and overtime to eke out the tie.

Here's the live blog from the game: