On the day the season started, I said that I believed that the Nittany Lions would be roughly equal to a middle-of-the-pack Atlantic Hockey team. This just might be the weekend that either confirms that prediction or establishes a new set of expectations.

Admit it: you're not entirely sure what to make of this team, particularly after last weekend, which saw PSU shut out by a Division III team followed by a win over a solid RIT program the next evening in front of 10,556 people partial mostly to the Tigers. I certainly don't know how to assess things just yet, and I'd like to think I follow the team closely enough to make that call if it were possible.

This weekend presents two more AHA opponents on the road, Penn State's fourth and fifth games against the conference: Army at 7:05 p.m. tonight and Sacred Heart at 7:05 p.m. tomorrow night. No video will be available for the two games, although audio streaming will take place through GoPSUSports.com All-Access and live stats will be available for both Friday and Saturday as well.

Neither Army nor Sacred Heart are generally in the top half of the league standings - in fact, they were the bottom two last season - but they're exactly the type of team that a top "conference" side should dispatch, while a middle-of-the-packer might give an inconsistent effort and split.

Army might be the most fascinating opponent on the entire schedule, and not really for any of the reasons I just discussed. Last season, Penn State's slogan was "Honoring the past, celebrating the present, roaring into the future," and no program touches all three of those elements quite as definitively as the Black Knights.


The present and past tie together rather uniquely in the form of Black Knights captain Cheyne Rocha, a senior defenseman. Rocha's father Larry was an Icers assistant from 1982 through 1985, who notably served as head coach for PSU's 1984 national championship run when Jon Shellington was unable to make the trip to Arizona. Cheyne's mother? Candace Finn Rocha. The then-Candy Finn was one of the best athletes in Penn State history. A four-time All-American in lacrosse, she also helped the Nittany Lions to a pair of national championships (1979, 1980) and was a two-time winner of the Broderick Award as national player of the year (1981, 1982). She was elected to the National Lacrosse Hall of Fame in 1998.

The future? Well, in the immediate future, there's tonight's game of course. But less than one year from now, on October 11, 2013, Army will be the opponent when the Pegula Ice Arena opens.

So really, I'm not sure that a single program can claim to be tied so closely to Penn State hockey at so many different stages. Robert Morris has something of an argument thanks to a pair of games with the Icers and a shared stake in the Three Rivers Classic going forward, but they can't go back to the 1940s. Cornell and Colgate played the 1940s team and could appear on future schedules, but both are missing a connection with the Icers. The reverse is true for the handful of current NCAA DI programs who have a history with the Icers but not the 1940s team, most notably Alabama-Huntsville, Canisius and Mercyhurst. The Big Ten opponents will obviously be a crucial part of the future, but none have been a part of the past.

Beyond all of that though, the Black Knights have a team that looks to be improved from the one that finished 4-23-7 (3-19-5 Atlantic Hockey) last year, ahead of only Sacred Heart in the league. Already, Army is 1-0-1 in the AHA on the strength of a win-tie series with the Pioneers, good for an early first place position. They were surprisingly competitive in the IceBreaker tournament in Kansas City - despite dropping both games, they played within a goal of national power Maine thanks to a stellar 50-save performance from goalie Rob Tadazak.

Up front, senior Andy Starczewski is the offensive leader with seven points already this season. Sophomore Zak Zaremba will be expected to chip in as well, and freshman Joe Kozlak is off to a quick start in his four-game-old collegiate career. Rocha and John Clark provide senior leadership on defense, while Maurice Alvarez (a former teammate of PSU freshman Jonathan Milley with the CCHL's Pembroke Lumber Kings) is more of an offensive blueliner.

Sacred Heart certainly presents the less exciting of the two opponents, but as mentioned, one that cannot be overlooked if Penn State is to establish the sort of consistency that is the hallmark of good teams. There hasn't been much to boast about with the Pioneers' season so far, with blowout losses at Providence (8-2) and Bentley (7-1) followed by the weekend with Army. That series began with a 5-2 Knights win at West Point powered by a Starczewski hat trick. The teams then moved to Milford, CT and the Milford Ice Pavilion where they literally took turns scoring, the last goal coming from Army's Kozlak with 33 seconds left in regulation of an eventual 4-4 tie.

Senior Eric Delong and sophomores Drew George and Brian Sheehan lead the scoring charge for Sacred Heart - the trio has five of the team's nine goals so far this season after combining for 33 of the Pioneers' 84 in 2011-2012. Another significant player is Kyle Verbeek, the son of my all-time favorite hockey player, Pat Verbeek, who scored 522 NHL goals with the Devils, Whalers, Rangers, Stars and Red Wings. So no, I'm not going to apologize for taking the rare chance to do this: 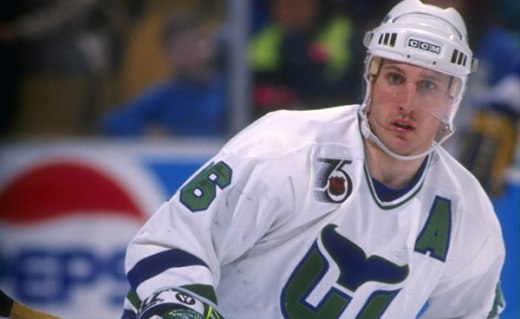 Goalies Andrew Bodnarchuk and Steven Legatto have split time in net, with neither boasting a goals against average south of five.

Following this weekend, Penn State will return home for a Saturday-only weekend against Buffalo State, that very same DIII team that embarrassed the Lions last weekend to raise the questions introduced at the beginning of this post. While PSU will surely be out to make a point then, the trick, of course, is to not let it affect what happens today and tomorrow.
Posted by Kyle Rossi at 2:50 AM