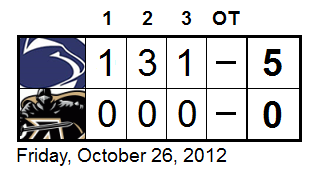 Actually, I have a couple. They're not quite the same ones I had just one week ago following the disaster at Buffalo State, though. Then, they sounded like "is NCAA Penn State actually going to lose to an ACHA team?" Now, they're more along the lines of "just how good is this team?"

Flattening Army (1-3-1, 1-0-1 Atlantic Hockey) 5-0 at West Point's Tate Rink Friday night in front of 1,537 fans represents an entirely new level for the Nittany Lions (3-2-0, 3-1-0 NCAA DI...and yes, I'm going to keep giving the record that way). That's not meant to disparage the stunning victory over RIT last Saturday, but that result was something that's always on the table when the strength of the two opponents is within a certain margin. This feels different. It wasn't squeaking out an overtime win over one of the worst programs in DI. It wasn't surviving a shot count of nearly 2-1 against to escape with an upset. It was, in fact, a blowout for PSU. Quite an unexpected one, based on what the prognosticators had to say.

There was no video stream available for those of us not able to make the trip, forcing an unhealthy reliance on statistics and brief recaps. But judging from those two things, there's very little not to like.

The Nittany Lions got contributions from many of the usual sources. P.J. Musico, named the starting goalie by Guy Gadowsky this week after an early-season rotation with Matt Skoff, justified the coach's move with a 34-save shutout, the first in PSU's NCAA history. The line that includes Kenny Brooks and Curtis Loik flanking David Glen was once again outstanding, with Brooks' first collegiate goal opening the game's scoring and Glen capping it in the third period. Big sniper Casey Bailey had a goal and a pair of assists to lead all point producers.


One unexpected contribution came from sophomore defenseman Pete Sweetland, who notched a goal and an assist in his first game of the season.

The description of how Penn State's goals developed in the GoPSUSports.com recap is more than adequate, so I'll defer to that here.

[At 9:15 of the first period], following a neutral zone transition, Glen found classmate Curtis Loik entering the offensive zone. Loik took the puck wide and passed to Brooks near the slot, where he fired a shot to the right of [Army goalie Rob] Tadazak.

Penn State notched three goals in the second period to take a 4-0 lead. [Jonathan] Milley doubled the Nittany Lion advantage with a power-play marker at 2:36. Bailey passed to Milley in the slot, where the Gatineau, Que., native's first attempt was blocked before he floated the rebound over Tadazak for the goal.

With 7:16 left in the stanza, Sweetland tallied his first goal of the season. The defenseman received a pass from Bailey at the blue line and sent a shot toward the cage that deflected off an Army defenseman and into the back of the net.

Bailey gave Penn State a 4-0 lead just 1:12 later. Junior defenseman Nate Jensen carried the puck down the right-wing boards and sent a backhanded, backdoor pass to Bailey for his third marker of the season.

In the third period, Glen tallied with 15:53 remaining. Sweetland made an outlet pass through the neutral zone to Glen, who carried the puck into the offensive zone before firing a shot low for his third marker of the season.

Bailey actually had a chance to add a second goal when he was selected to take a penalty shot with five minutes remaining in the game after Army goalie Ryan Leets (in the game for the pulled Tadazak) threw his stick at the puck. Leets atoned for his mistake by stopping the attempt.

It's always dangerous to start applying the transitive property in sports, but fueled partly by the sort of hubris that follows a big win, let's do it anyway.

On October 13th at the IceBreaker tournament in Kansas City, Army lost to Maine 5-4. Tadazak made 50 saves on 54 shots to keep his team close while the Black Knights made 24 attempts on Maine's goal. The day before, Nebraska-Omaha topped the Knights 5-1 in a nationally-televised game that featured a shot count of 38-18 in favor of the Mavericks.

Maine and UNO were both middle-of-the-pack picks in Hockey East and the WCHA, the two toughest conferences college hockey has to offer (to be fair to the comparison, the Black Bears are off to an atrocious start, as Army is the only team they have beaten so far). Penn State topped the Black Knights 5-0 with a 45-34 shot advantage at West Point.

Of course, much like the win over RIT last weekend washed (most of) the taste of the Buffalo State game away, the gains made Friday night could easily fall by the wayside without a strong effort Saturday night, when the Gadowsky road show makes its way to Milford, CT and a 7:05 p.m. puck drop at Sacred Heart. A win there though, and two more against DIII opposition (Tuesday at Fredonia, next Saturday's rematch with BSC)...well, we'll get there when we get there. But at this moment in time, the Nittany Lions look like an outfit capable of exceeding all reasonable expectations.
Posted by Kyle Rossi at 2:20 AM