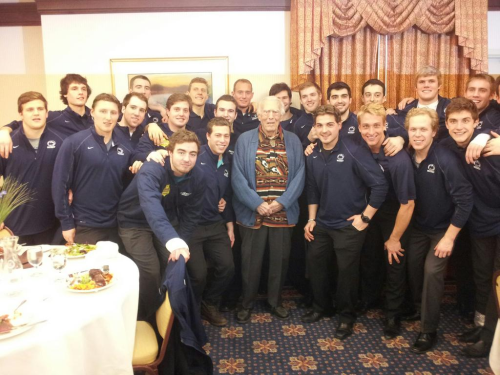 2. When will the season start?
(philly.com)


The NHL will play either a 48-game or 50-game season... with a 48-game schedule, the Flyers would likely begin - as previously reported - at home on Jan. 19 with a nationally televised rivalry game against Pittsburgh at 1 o’clock. (Penn State plays Vermont at 7:30 in men’s hockey at the Wells Fargo Center).

Ummm... wow. So you have what (for my money) is the NHL's best rivalry, featuring the two Pennsylvania teams, in the loooong-awaited NHL season opener, leading into Penn State hockey that evening in the same building, in what was already a fairly high-profile game for the Nittany Lions. And while the on-the-fly efforts to boot up the NHL season represent an evolving story at this point, as of Sunday night, indications were that the 48-game season will be the option taken.

Yeah, I can probably forget about getting a credential for PSU-UVM.

This is precisely the sort of filler article that doesn't make Three Stars in a busier week, but since this wasn't a particularly prolific period... and I suppose it's nice to take a step back at the midpoint of the season for some reflection at the calendar flip. Here's Guy Gadowsky, in that vein:

It isn't really a hockey story, and rumors that hit late Sunday night - if true - may throw the entire thing into jeopardy... but as I'm sure you know by now, none other than Terry Pegula reportedly kicked in $1.3 million towards PSU football coach's Bill O'Brien's 2013 salary. The move, of course, was part of an effort to retain O'Brien, who flirted with the NFL's Cleveland Browns and Philadelphia Eagles last week. Quoting Onward State:


The “Thank You Terry” blog was so named because of Pegula’s $102 million gift to bring Division-1 hockey to Happy Valley. The $1.3 million Terry Pegula promised yesterday is only about one percent of that total, but in the end, it might turn out to be an even bigger reason to say thanks.

I categorically disagree, but hey, shoutout from someone huge, followed by loads of new readers. Shots on me.

UPDATE 9:28 A.M.: In a Monday morning press conference, O'Brien denied the entire thing, directly stating that he did not receive a $1.3 million raise from Pegula. That doesn't definitively mean that it didn't happen, but with O'Brien standing as the only supposedly involved party to speak on the matter, the burden of proof has certainly shifted back to the rumor mongers.

FoTYT Ross Insana tried his hand at a podcast heavy on PSU hockey content, and it's a quality listen. Meanwhile, I'm jealous of anyone who likes the sound of their own voice enough to do something like that.

Pittsburgh native and Ohio State alumnus R.J. Umberger (who also helped the Buckeyes as a volunteer assistant during the NHL lockout) is impressed with hockey's growth in Pennsylvania.


“It has been special to see how things have changed, and I loved seeing the enthusiasm for the college games this week [at the Three Rivers Classic],” Umberger said.

He singled out how the sport is growing in Pittsburgh, in particular.

“This was a great week for Pittsburgh hockey,” Umberger said. “Having Penn State around is going to make it even better. Things are looking up for hockey in this city.”

Actually, a much more interesting measuring stick situation will come this weekend, when ACHA D1 Oklahoma plays two in the Von Braun Center. Between those games, the Sooners' two at the Ice Pavilion on February 15th and 16th, and their 4-3 overtime loss to the CIS' University of British Columbia on December 29th, OU should prove to be quite helpful in assessing the ACHA's place in the college hockey pecking order this season.
Posted by Kyle Rossi at 12:08 AM