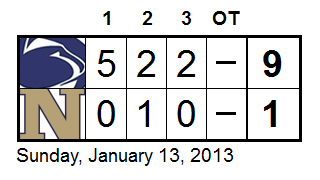 Suffice it to say that the women's ACHA team had quite an interesting day on Sunday, one that began with their being locked out of the Ice Pavilion when preparing to make the drive to Annapolis for their first game of the new semester.

Once arriving at the Naval Academy, it quickly became apparent that Navy's team had forgotten about the game, scheduled for 1:55 p.m., and several options, including simply giving the ice time to PSU for a practice and recruiting some of the under-19s from the game scheduled prior to PSU-Navy were considered. But in the end, the Midshipmen were able to piece together something resembling their regular club.

For those who don't know, I've taken on the task of putting together a website for the team, so it would be kind of foolish to not plagiarize myself at least a little here in recapping the game, one notable for the successful debuts of semester break additions Taylor Nyman and Elizabeth Denis, both forwards (Denis, of course, played for the Lady Icers last year).

Mandy Mortach scored four times and added two assists, while five other players enjoyed multi-point games as No. 4 Penn State climbed to 5-1-1 with a 9-1 rout of the Naval Academy.

After a fairly slow and even start, Elizabeth Denis opened the scoring on a 2-on-1 with Devon Fisk 6:30 into the game. From there the floodgates opened, as just 28 seconds later, Carly Szyszko put back the rebound of a Tara Soukup shot. By the end of the first period, PSU had a 5-0 lead after Fisk created a turnover and fired home, Mortach buried a second rebound goal started by a Soukup shot during a PSU power play - then added her second four minutes later.

Navy did get a goal back on a rebound effort with 4:06 remaining in the second period, but not before Mary Kate Tonetti's redirection of a Szyszko pass followed by Tonetti's assist of a Mortach laser from the high slot pushed the game into blowout status.

In addition to Denis, and her goal in her re-introduction to Penn State hockey, Taylor Nyman made a highly-successful debut with the team. She scored the game's final goal from just outside of the blue paint while assisting on two others, including a late helper to Mortach on a 2-on-0 that she easily could have taken herself.

Katie Vaughan started in goal and gave way to Sarah Eisenhut after the first period. Both were outstanding, combining for 16 saves and continuing PSU's three-month streak of not allowing more than one goal in a game.

Fourth-ranked PSU is in for a much more difficult test next up on January 26th and 27th at No. 2 West Chester. It goes without saying, but those two games carry huge implications for the next ACHA WD2 poll, due out the week following those games, and therefore for the ACHA national championship tournament. 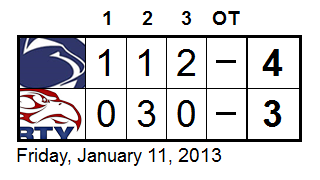 The Ice Lions also opened their semester over the weekend, with the always-tough Virginia road trip to face MACHA South Division opponents Virginia Tech and Liberty - but thanks to two tight wins it was a successful one, as Penn State is now 15-4-1 overall.

Despite a first-period Ryan Urban goal and heavy dominance on the shot board, the Ice Lions found themselves facing a third-period deficit against Liberty on Friday, due to Flames tallies from D.J. Dinnison (twice) and Bobby Cervone in the middle frame surrounding PSU defenseman Max O'Malley's second goal of the season.

The contest swung back in the Ice Lions' favor thanks to a late second-period boarding major to LU's Seth Reed. Penn State took full advantage of that glorious opportunity by scoring twice on the long power play, once by Chris Lewis (from Joe Zitarelli) and also by Urban (from Mac Winchester and Tyler Starn). Goalie Ryan Demuth (25 shots, 22 saves) held things down for the last 16:05 of the game, including through two Flames power plays. 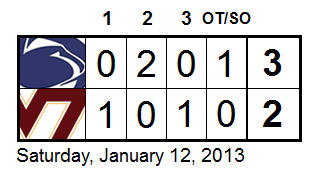 Against Virginia Tech the next night, the Ice Lions allowed the game's first goal, to the Hokies' Alex Hashmi, with just 15 seconds remaining in the first period. Perhaps even worse than that, PSU failed to capitalize on four power plays during the stanza, including a long 5-on-3.

The team recovered well though, with Peter Daley's rebound goal tying the game during the middle stages of the second period and Urban finally cashing in a power play with a backhander shortly after. Fredrik Linge assisted on both goals.

Demuth, who turned in another strong effort with 23 saves on 25 shots, surrendered a Virginia Tech goal to Peter Veltri with Starn in the box for interference halfway through the third to tie things back up just after a 5-on-3 ended. However, he stopped two of three Hokies during the shootout that followed a scoreless overtime, allowing goals by Zitarelli and Brandon Russo to give PSU the win.

The Ice Lions, who have likely solidified their position of second in the ACHA D2 Southeast Region (significantly, a ranking that would earn an autobid to the ACHA national championship tournament) with the two wins over the regional Nos. 7 and 8, have just six regular season games left. The first two of those are this coming Friday and Saturday at Kentucky, home of two ACHA legends: midnight starts and schedule posters. 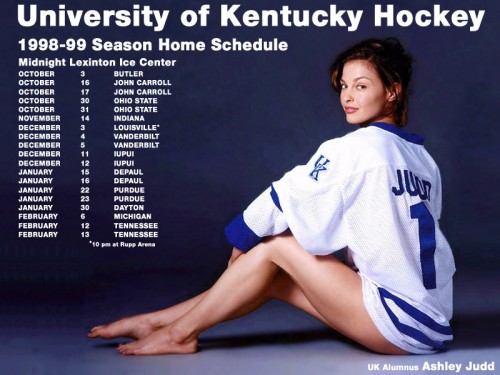