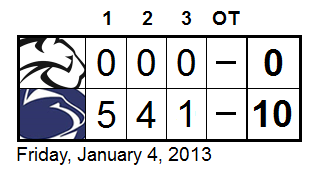 Severely overmatched almost from puck drop, the Cougars - who lined up with just seven forwards and four defenders - witnessed PSU put on a stat-padding clinic. Nine of the Nittany Lions' ten goals came at even strength, helping every single PSU skater improve her plus-minus, with the defense tandem of Sarah Wilkie and Jordin Pardoski, along with forward Hannah Hoenshell, leading the way with +4 ratings. Additionally, every skater except Wilkie, Birdie Shaw and Lindsay Reihl registered at least one point and goaltenders Nicole Paniccia, Celine Whitlinger and Brooke Meyer each took one period of a shutout effort.

It's probably not worth recapping each goal in great detail, but here are a few of the highlights:
PSU will try for a duplicate effort - while Chatham will try for better - Saturday night at 7:00 p.m. in the Ice Pavilion.