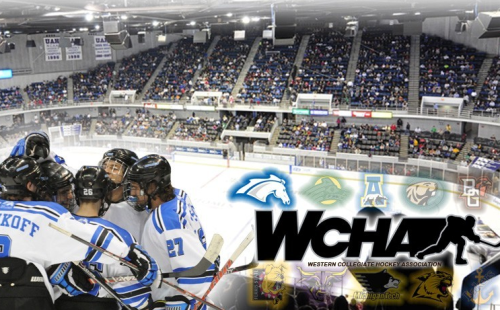 Oh hey, feature story on Tess Weaver to lead things off. I actually didn't know it existed until I went to assemble this post because it didn't get pushed through to my phone for some reason, so that was a nice surprise.

One reason I love IcersGuy recaps: he always makes some connection that I miss. Here's the latest one:


What we learned from tonight is that Taylor Holstrom and Justin Kirchhevel like to play in the city of Brotherly Love. Both players tallied goals in the Winter Classic game against Neumann last season, and they would both light the lamp against Vermont in this game.

Didn't even think to check on that. Clearly, my mind has lost its keen edge. And clearly, TBS runs way too many Big Bang Theory commercials.

I normally reserve the top three slots for items directly connected to Penn State, but this is a worthy exception. Congratulations to all associated with Charger hockey on what is widely viewed as a program-saving outcome.

Worth mentioning: The PSU/Big Ten-triggered realignment still hasn't killed anyone. And it played a huge role in UAH's new lease. Chew on that, haters.

Know who my least favorite PSU recruit is? Eric Scheid.

Homophobic slurs? F reading and school? What a fine representative of our academic institution we've pulled. Someone inform this joke that he's not at Alaska-Anchorage anymore. We're better than this, period.

While not necessarily something that drastically affects the lives of you and I, for those charged with recruiting college hockey players, life has gotten a little easier. The NCAA has removed some recruiting restrictions, notably ones related to methods of communication and the number of coaches on the road at one time.


The changes come as part of a drive toward “reducing the volume of unenforceable and inconsequential rules that fail to support the NCAA’s enduring values,” according to the proposals.

College Hockey News also observed that the rules will be more restrictive in at least one way, as coaches are now prevented from scouting opponents in person unless their team is participating in the same event.

Sticking with a recruiting theme, here are a couple who got away. One is Joe Gambardella, a teammate of PSU signee Zach Saar. He's headed to Lowell, which is really unfortunate, because...


Take the week after Christmas, when Gambardella, the leading scorer for the United States Hockey League's Des Moines Buccaneers, was hit in the face with a deflected puck. The disc struck him under his half-shield, broke his left cheek, sinus and orbital bones and caused a deep cut that required 22 stitches. After getting sewn back together, Gambardella went back out and finished the game.

"The way I like to look at it is, it's like a 'Rocky' story," Gambardella said of his rise in hockey world. He waited a beat, and delivered the punch line.

The other is Jared Muto, who plays for Sioux Falls in the USHL and claimed a PSU offer but will attend Niagara.


“Location was a big thing for me,” Muto said. “I’ve been doing the whole traveling, dorming thing in the USHL, so I’m looking forward to moving back home. … My dad’s side of the family has never seen me play. We’re all really excited that I’m coming back.”

An interesting both-sides-of-the-coin look at huge-money college athletics boosters, including T. Boone Pickens, Phil Knight, Kevin Plank and our very own Terry Pegula. Well, it's probably interesting, it lost me with the lede...


Just 28 months ago, ice hockey was a successful but obscure club sport at Penn State. Its players shared ice time with broomball teams and its arena held slightly more than 1,000 fans, which hardly mattered since few ever came to hockey games.

Frank Fitzpatrick: No Frank Seravalli, that's for sure.

Into the woods: After getting lost, I built a cabin
(Broad Street Hockey)

Finally, shoutout to Geoffrey Detweiler of BSH, who is hanging up his Ctrl key and retiring from doing the site's link posts. His reasons are well respected in this corner, especially in the midst of all the #HockeyIsBack ridiculousness (hockey never left, the NHL did), and worth a read.

Why am I linking it? Because BSH is literally the number three source of all-time pageviews for this site, due mostly to Detweiler. Thanks bud. And try not to go too crazy keeping up with the perpetual circus that is Chelsea FC.
Posted by Kyle Rossi at 1:53 PM