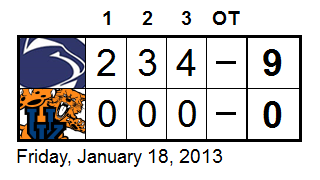 Kentucky, while 9-17-0 this season and generally not in the ACHA Division 2 national conversation, is still an extremely tough road trip. Long noted for their schedule posters featuring an array of not unattractive women, UK is also famous for their midnight start times and for drawing large and raucous crowds, even at that hour.

None of that seemed to present much of an issue for the Ice Lions last Friday night in a blowout win.

Kevin Lowthert earned the shutout in net, but the story of the game was PSU's steady barrage that saw goals by Austin Meehan and Taylor Vincent punctuate a 25-9 shot advantage in the opening period. In the second 20 minutes, a Chris Lewis rebound goal from a Joe Zitarelli shot, a Tyler Person snipe through a screen and a Will Vaeth backhander essentially clinched the game's result.

PSU leading scorer Franky Reluzco, who assisted on Vincent's first-period odd-man rush goal, performed most of the third-period mop-up duties. The sophomore from Frederick, MD scored a hat trick entirely within the frame, with only Vincent's tip-in preventing Reluzco from going natural. The blowout on Friday, tighter game on Saturday pattern tends to appear quite frequently in weekend series, and indeed, it turned up for the back half of the set with Kentucky, forcing the Ice Lions to grit out a vital win. UK jumped out of the gate quickly and built a 2-0 lead with 5:44 left in the opening period, before Vincent's deflection of a Brandon Russo shot on the power play cut the deficit to one at the first intermission.

Although Mike Broccolo tied the game up just 16 seconds into the second period, the Wildcats weren't done, as they capitalized on a second-chance opportunity seven minutes later.


Junior Matt Hudzinski would earn his first goal in a UK jersey to recapture the Cats’ lead, 3-2. He said the feeling of scoring his first goal was unbelievable.

“When that puck crosses the line, hearing the crowd cheer and knowing that it’s all for you is an incredible feeling. Much different than when you’re sitting on the bench,” he said.

A Chris Lewis interception of an errant pass right in front and his subsequent bury with 6:53 left would pull the Ice Lions back even at 3-3 and initiate a scoring burst to close the period. Vincent's rebound goal with 2:38 left gave PSU its first lead and Lewis joined Vincent as a two-goal man by finishing shorthanded off of a feed from Russo with 39 seconds remaining. The two-goal lead heading into the third period would prove to be important.


With under six minutes played in the third, senior Matt McLaughlin scored the Cats’ fourth and final goal of the night, falling short of the comeback.

It's fair for Kentucky to claim a moral victory against heavily-favored Penn State, but the Ice Lions will certainly accept the actual victory, as each win is important in a tight race for the second spot in the ACHA Southeast Region rankings, and the autobid to the national championships that comes with finishing in the top two. PSU, the current no. 2, is now 17-4-1 overall and on an eight-game winning streak. The team, however, faces a stiff test this weekend in hosting Monmouth on Friday and Rowan on Saturday in their last-ever Ice Pavilion games. Rowan is presently the fifth-ranked team in the Southeast, although the Ice Lions defeated the Profs 3-1 on December 15th.

The women, still 5-1-1 and ranked fourth in ACHA WD2, have been idle since a 9-1 blowout at Navy on January 13th, but that status won't last long. On tap this weekend: two gigantic games at No. 2 West Chester.

It probably doesn't need to be said, but the series will almost certainly go a long way towards determining whether PSU will make the ACHA national championships in Ashburn, VA from March 7th through 10th. Pat Fung's crew is in position to receive an invite right now as the third-best team in the East Region, and with just this weekend and a pair of games at WD1 Buffalo remaining before the final ranking is released, two wins in four might be enough to lock down a bid.

Obtaining those wins Saturday and Sunday certainly won't be easy. The Golden Rams are 11-1-0, with the only blemish on their record coming from California (PA), the top-ranked team in the country, and one that WCU also has beaten this season. Junior forward Becky Dobson paces the West Chester offense with an eye-popping 36 goals and 19 assists this season - her goal, assist and (natually) point totals are all tops in WD2.
Posted by Kyle Rossi at 3:01 AM