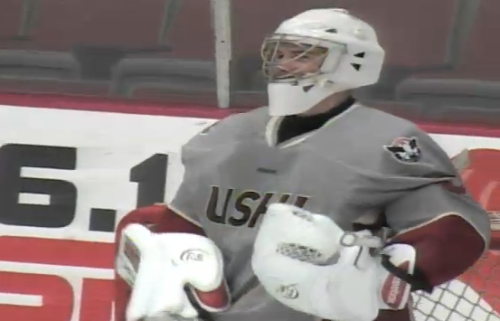 In a game featuring USHL stars eligible for the 2013 NHL Entry Draft, Eamon McAdam was named the star - and also showed a horde of NHL scouts in attendance why he was recently rated North America's No. 7 goaltending prospect ahead of the June selection by Central Scouting Services.

The Perkasie, PA native, who will join the Nittany Lions next season and presently plays for the USHL's Waterloo Black Hawks, took MVP honors at the second annual USHL/NHL Top Prospects Game, held Wednesday night in Muskegon, MI. His Team West won the game 2-1 over Team East thanks to goals from Conor McGlynn and Jason Cotton - and also a spectacular anti-goal by McAdam.

Fortunately, there's video of the save, because no words I can offer are capable of delivering the full effect. But allow me to set the stage a little. Team West presented as the better team in the early portion of the game, keeping McAdam relatively clean despite nice stops on Frederik Tiffels, Bowling Green commit Thomas Ebbing, and a great poke check on Cameron Darcy in front. McGlynn, who is headed for Boston College, gave Team West a 1-0 lead with 4:45 into the game off of a nice feed to the middle from future UNO Maverick Jake Guentzel.

After a ten-minute stretch that included a penalty kill each way, a pair of Minnesota commits, Vinnie Letteri and Taylor Cammarata, nearly made it 2-0 on a pretty give-and-go play, but a third, Justin Kloos, barreled over Team East goalie Charlie Lindgren just as Letteri buried. On the ensuing power play, Team East looked to have a back-door play set up perfectly as defenseman Mike Brodzinski - still another Minnesota guy - crept down low. Then...


"Oh my God … he [makes a save like that] every once in a while in practice but that's the first time I've seen it in a game, so I was happy for him," Waterloo defenseman Ian McCoshen said of his teammate.

After McAdam survived the rest of his 30:40 in the game without allowing a goal, it's probably fair to say that he won the MVP on that play. His 11 total saves, to go with the win, might not jump off of the game sheet, but obviously, the number isn't the whole story.

Early in the second period, outstanding work beneath the goalline by Garrett Gamez (Denver) and Drew Melanson (RPI) resulted in Gamez's no-look pass to Cotton (Northeastern) in the slot for a 2-0 West lead, and once again, McAdam was instrumental in protecting it. On the shift immediately following the goal, he stood tall on a scramble in front started by a Ross Olsson shot. Just after that, he poked away from Michigan commit Alex Kile, who was sprung on a breakaway (the game story linked above identified the shooter on that play as Ebbing, so... it was probably one of the two), and closed out his time in the game with a sturdy save on St. Cloud-bound defenseman Ben Storm while Team West was on the power play.

Waterloo teammate Cal Petersen, headed to Notre Dame in 2014, played the second half of the game in the Team West goal and was outstanding himself, making 20 saves but allowing a late goal to John Hayden - who just opposed Penn State a couple weeks ago as a member of the U.S. National Development Program U18 team - to end whatever challenge he had mounted to McAdam's MVP argument.


"Maybe there was a little [rivalry] but nothing crazy, just competitive," McAdam said. "Obviously, Cal gave up a goal, but there was nothing he could do about that. We're happy he played a great game too."

Rivalry or not, both look to be well on their way to official status as NHL prospects as the second half of the USHL season begins.
Posted by Kyle Rossi at 9:13 AM