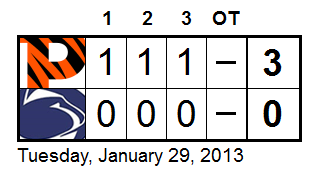 I'm going to defer to the very brief GoPrincetonTigers.com recap for the fine details despite watching (and live blogging, below, if you want really fine details) the game, because the proper words are eluding me right now.

I will say that I don't think the loss was an unmitigated disaster by any stretch of the imagination, despite the Nittany Lions (7-17-1, 1-10-1 CHA) dropping a ninth straight game against Division I, and despite being the team's being held under two goals for the 16th time this season, including six shutouts. PSU played outstanding in-zone defense to limit the volume of rubber on Nicole Paniccia and, particularly in the first and last periods, was also effective on the counterpunch. Princeton (7-12-2, 2-10-2 ECAC) was the beneficiary of a fluky goal, Karen MacDonald's fluttering effort off of Corey Stearns' faceoff win that fooled Nicole Paniccia with 4:28 left in a tight-checking first period that only saw 11 shots between the two teams. The home team deserved to be 0-0 at the intermission, but wasn't.

The Lions probably should have scored on at least one of the two power plays - the first, beginning at 15:20 of the second period in a 2-0 game was particularly on point. I suppose it needs to be said that Penn State did not generate a single shot in the frame until then (which was quite a frustrating stretch at a key point in the match), but between Shannon Yoxheimer's usual eight on net and notable close calls from Taylor Gross, Jill Holdcroft and Micayla Catanzariti, there was enough offense for a goal or two. No, it's not all fluffy puppies (see: breakouts, one of which led to a turnover before Molly Contini's 3-0 goal), but it was a more competitive hockey game that a quick glance at the score would show.

Here's the recap from the winning side.

It was the first meeting between the two squads and Princeton's first game in 17 days, as final exams concluded this past Friday.

Freshman Kimberly Newell made 11 saves in the first two periods to earn the win. Sophomore Ashley Holt made her eighth appearance in goal, playing the third period and stopping eight shots as the Tigers outshot the Lions 30-19.

Freshman defender Karen MacDonald scored her first career goal, the game-winning goal at 15:32 of the first period with senior Corey Stearns picking up her first of two assists on the night.

Freshman Molly Contini notched her fifth goal of the season with senior Kelly Cooke and Stearns assisting at 9:16 of the third period as the Tigers took advantage of a turnover.

Penn State netminder Nicole Paniccia made 27 saves as the team falls to 7-17-1 on the season.