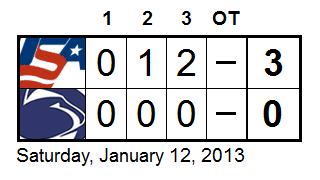 The Nittany Lions fell to 10-13-0 in all games (while remaining 8-11-0 in NCAA games and 6-10-0 against NCAA Division I) and had to settle for a weekend split following a 3-0 exhibition loss to the U.S. National Team Development Program Under-18 team Saturday night. Here's the GoPSUSports.com recap, followed by the TYT live blog from the tilt.

The Penn State men's hockey team split its weekend series against the U.S. National Under-18 Team with a 3-0 setback at Greenberg Ice Pavilion Saturday evening.

After a scoreless first period, Sean Malone gave the U.S. a one-goal lead with 1:45 left in the second stanza. Michael McCarron tallied at 16:31 of the third before Evan Allen added an empty-net marker in the game's final minute. Team USA netminder Thatcher Demko turned aside 25 shots.

Nittany Lion goaltender PJ Musico (Orange, Calif.) made 41 saves, while Penn State finished 0-for-5 on the power play. The U.S. went 0-for-6 with the man advantage and outshot the Nittany Lions by a 44-25 margin.

In the opening period, Penn State found itself down a man early and often as the team committed four penalties during the game's first six minutes. The Nittany Lions were outshot 19-4 in the opening frame, with Musico turning aside each U.S. attempt.

With 1:45 left in the second period, Team USA skated to a 1-0 lead. Allen moved the puck to Labanc in the right circle, where he passed to Malone at the far post for the one-timer.

McCarron gave the U.S. a 2-0 advantage with 3:29 left in the third. Shane Eiserman passed to McCarron in the slot, where his high shot beat Musico. Tyler Kelleher collected an assist on the play.

The U.S. added an empty-netter with 58 seconds remaining when Allen collected the loose puck along the half-wall and wristed a shot into the open net.

The Nittany Lions will return to action Tuesday, Jan. 15 when they welcome Neumann to the Greenberg Ice Pavilion. Opening faceoff is set at 7:30 p.m.