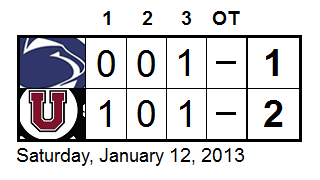 Nicole Paniccia returned from flu-like symptoms that kept her out of Friday's game with a strong 34-save effort and Jess Desorcie scored a third-period rebound goal, but neither was enough to keep the Nittany Lions from falling to 7-14-1 (1-8-1 CHA). Penn State will now have next weekend off before returning to action January 25th and 26th at Syracuse.

Here are the game's highlights, via Union Athletics...

...and here's the recap from the winning side.

Penn State came out the starting faceoff raring for the first goal of the game as the Nittany Lions quickly put up four shots. However, Shenae Lundberg came up with the stops. Union slowly regained momentum as the game progressed leveling the shot count. Midway through the first period, Ashley Johnston was sent to the penalty box for hooking as Penn State went on the power play. The penalty kill unit for Union faced four shots on target but did not concede a goal.

Three minutes later, Union won the faceoff in the Penn State third in which Bryanne Panchuk found Jessica Kaminsky open in the slot in which she found the back of the net for the game's first goal. The Dutchwomen were seeking to double their lead in the latter part of the first period on the power play but netminder Nicole Paniccia stopped two shots on net to prevent any further scoring to give Union the 1-0 edge after the first period.

Neither team gave ground in the second as both sides exchanged eight shots each. Penn State had multiple chances for the equalizer as Emily Laurenzi received a pass from Hannah Hoenshell in front of the Union net. Laurenzi was able to get the shot off but Lundberg made the glove save from point-blank range. Katie Zinn had a chance as well as her shot was knocked down by Lundberg and escaped in front of the crease but Kelly McGrath swept the puck away from the Penn State skaters. Hoenshell was also denied a chance in front of the net as Lundberg made a great stick save to prevent the redirect from going in.

Union was able to put some pressure of Paniccia towards the end of the second period as Rhianna Kurio made a diving effort to keep the puck in the offensive third. Thomson was the recipient of the Kurio pass as she found Valente skating towards the net. Valente made a hard shot on the right side but Panccio made the pad save to keep the score at 1-0.

The Dutchwomen were able to extend their lead in the third with Kaminsky dishing out a pass to Panchuk. Bryanne took the puck around the net, as she was able to beat Paniccia on the wrap around to increase the lead to two. The goal was Panchuk's first of the season. Union's two-goal cushion did not last long as Jess Desorcie snuck it by Lundberg to give the Nittany Lions their first goal. Taylor Gross and Shannon Yoxheimer were able to find the center as Desorcie got it by the paddle of Lundberg. Penn State opted for the extra skater as time was expiring but Union buckled down and eventually earned the 2-1 victory.

Lundberg tallied 25 saves in the win while Paniccia notched 34 saves in the loss. Shots were in favor of Union 36-26 and in faceoffs 25-21. Each of the special teams units went 0-1 on the power play.

The Dutchwomen will conclude their season long five-game homestand as New Hampshire will visit this coming Tuesday, January 15 with the puck dropping at 7:00 p.m.
Posted by Kyle Rossi at 6:30 PM