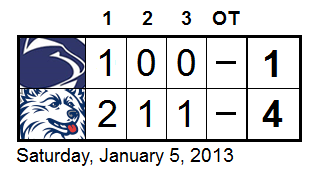 Casey Bailey scored just 13 seconds into Saturday night's game at UConn - but the lead lasted just 1:09 and the Nittany Lions were shut out for the final 59:47, as Connecticut earned a sweep of Penn State. PSU dropped to 9-12-0 in all games, 8-11-0 in NCAA games and 6-10-0 against NCAA Division I.

Guy Gadowsky's charges will return to the Ice Pavilion this coming Friday and Saturday for a pair of games against the U.S. National Team Development Program Under-18 team.

The University of Connecticut men's hockey team earned a weekend sweep over visiting Penn State with a 4-1 victory at Freitas Ice Forum on Saturday night to improve to 7-8-2 on the season. Sean Ambrosie scored the game-winning goal late in the first and Garrett Bartus stopped 42 shots to earn the victory.

The Huskies allowed a goal just 13 seconds into the game but responded 1:09 later and scored four straight to finish ahead 4-1. Bartus stopped 18 shots in the third period after being pulled in the last two games before break and not appearing in the UConn Hockey Classic.

"I was struggling a bit before the break, I had to get back to basics and focus on my angles," said Bartus. "After having a couple rough ones, a game like this really helps. You have to have a short memory as a goalie and take each night as a separate game and focus on the task at hand."

Penn State dropped to 8-11-0. UConn will be in action next with two games at Robert Morris on Friday and Saturday, January 11-12 in Moon Township, Pa. Both games can be heard at WHUS.org with live video at UConnhuskies.com.

The action in Saturday's contest opened quickly with two goals in the first 1:22. Penn State scored just 13 seconds in with Casey Bailey beating Bartus from the slot on a three-on-two.

The Huskies responded at 1:22 with freshman Shawn Pauly scoring his second of the weekend. Classmate Joe Birmingham put a shot on frame from the slot that was kicked away by Musico. Pauly corralled the puck on the right side of the net and stuffed home his second goal of the year.

"It felt great (to get first two career goals)," said Pauly. "It took a while but I was trying to not let that affect me. The older guys kept saying that it's coming, it's coming and not to worry. It finally happened and it felt great."

Connecticut took the lead at 16:38 with a power-play goal off the stick of senior captain Sean Ambrosie. Brant Harris sent the puck down the left wall to Jordan Sims. Sims found Ambrosie in the slot who slid the puck over to his backhand and over the glove of Musico. The goal was Ambrosie's fifth of the year.

The Huskies made it a two goal lead with Cody Sharib's fifth of the season at 3:59 of the second period. Tom Janosz sent the puck along the left wall down behind the net. Sean Ambrosie collected on the right side and sent a pass through the crease to Sharib. Sharib flicked a backhand in for the 3-1 lead.

Penn State rang one off the post midway through the period and the UConn 17th-ranked penalty kill successfully denied four PSU power-play attempts, allowing just four shots on goal during the four man-advantages.

Connecticut was outshot in the third, 18-6, but Bartus was up to the task as the UConn defense once again kept most of the PSU attempts out wide.
Posted by Kyle Rossi at 3:32 AM