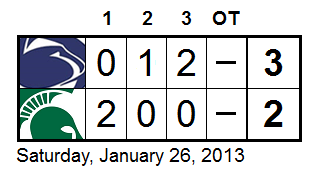 There's a school of thought - one I subscribe to - that says that goals are the byproduct of a well-performing hockey team. Generate shots and chances of a good enough quality, and the goals, which are really a result of luck and percentages to some degree, will come. No, more chances in a 60-minute hockey game doesn't always mean more goals and the win, but the better-executing team putting forward more effort will win most games, and a good chunk of them over the course of the season.

In other words, if you're playing well, and plan to continue doing so, don't sweat a 2-0 deficit 6:21 into a game.

Skoff's a good goalie, and he proved it once again by settling down from there and finishing with 31 saves on 33 shots. And Penn State, the better team throughout most of the game, kept plugging, making the 2-0 lead look quite wobbly, even as the Spartans continued it into the third period.

Mark Yanis, back in his home state, took the first bite out of that lead just 32 seconds into the second period on a PSU power play, when he located the rebound of a Max Gardiner attempt in the slot and fired it past an out-of-position Jake Hildebrand. And unlike Friday, when MSU's game-winning goal was scored during a late major to Connor Varley, PSU's penalty kill passed its endurance test on Saturday, neutralizing 3:58 of Spartan advantage time in the latter stages of the period after calls of high sticking to Yanis and a questionable diving infraction tagged to Curtis Loik.

The seemingly inevitable breakthrough came in the third period. First, 3:13 in, Taylor Holstrom's centering feed out of the corner took a fortunate bounce off of a Michigan State skate to Casey Bailey in the slot, and the big Alaskan sniped to tie the game. Holstrom scored the winner with 4:01 left, as Bailey returned the favor by feeding the Mercyhurst transfer in the slot, where he beat Hildebrand on the backhand.

Penn State, which outshot the Spartans 50-33, is now 3-3-0 against major-conference teams - including 2-1-0 versus future Big Ten opponents - in a season where many (guilty) would have been happy with simply playing a competitive game against those types of teams. With just the season-closing series at Wisconsin remaining in both of those categories, it's now safe to call this inaugural NCAA season an unqualified success at the top end.

Next weekend, the Nittany Lions travel from the future to the past, with the likely last games ever against ACHA archrival Ohio. Friday's game will be played at Hershey's Giant Center at 7:00 p.m., while Saturday's rematch will be at the Ice Pavilion at 7:30 p.m.

Here's something resembling a live blog... I say "something resembling" because I was unable to watch the game broadcast to the widest television audience in PSU hockey history on Big Ten Network because I don't get the channel. So it's basically a collection of tweets and comments from people who did see it, with my occasional contributions where I had something to offer.