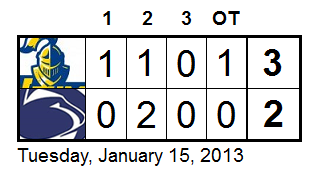 A confession: I broke my "don't get mad" rule with this one. Losing to a DIII team at home in a revenge situation? Yeah, I'm going to blow off the blog for the night after that, a 3-2 overtime defeat at the hands of the Neumann Knights that saw Penn State fall to 10-14-0 in all games and 8-12-0 against NCAA teams while staying 6-10-0 vs. NCAA DI.

Shots are nice. I realize that due to the 46-17 shot count, including 21-1 in the third period, history will probably remember this game as "PSU dominated, hot goalie, oh well," but that's an excuse. Even Guy Gadowsky seemed to know that after the game - here's what he said on giving up the first goal of the game just 20 seconds in.


“We were not ready. The hockey gods will never let you get away with that. It’s a mental toughness issue. We have to figure it out.”

It's a season-long problem that seems to always come up against lower-division teams: Buffalo State on October 19th and November 3rd, Arizona State on November 30th and December 1st and now Neumann on January 15th. Penn State actually came back to win two of those games, but lost the other three.

This game, as I'm sure you know by now, followed a familiar upset pattern: underdog gets a quick lead, a heavy barrage from the favorite gets them back in it, but ultimately, the underdog endures, makes the one crucial play and steals it.

Gadowsky emphasizes at every opportunity to not give too much concern to wins and losses. He's absolutely right about that, it shouldn't be the point right now, but it's awfully hard to avoid as the only easy way to measure progress without actually being in the room. So, for most of us, something like 3-3-0 against NCAA Division III and ACHA Division 1 is a little alarming. The team now cannot finish better than 7-3-0 in ten games I think most had penciled as easy wins coming into the season, or 2-2-0 against NCAA DIII and 5-1-0 against ACHA D1.

Just as a point of comparison, the Icers were 1-1-0 against NCAA DIII (with both opponents also on this year's schedule) and 28-3-1 against ACHA D1 last year. Aren't we supposed to be better now?

The highs - Ohio State, RIT, Air Force - have been incredible. But this flip side is also going to be part of the story of this inaugural NCAA season.

The good news? This probably means the Nittany Lions will play well on Saturday against Vermont.

Okay, that's enough from me. Here's the Neumann recap, with the PSU "highlights" embedded to show the Casey Bailey and David Glen goals that don't get tremendous run from the NU people.

Low netted the goal off a face-off in the Nitany Lions end of the ice. Casey Rogers and Aaron Keaney drew the assists.

Ben Curley made 44 saves in the game. Neumann was outshot 46-17 for the game.

Chris Bournazos kept up his high level of playing with a goal just 20 seconds into the game to give the Knights an early lead and a jump to start the game. Jordan Zalba and Craig Cowie drew the assists. The Knights killed off a 5-on-3 in the period and took the 1-0 lead into the first intermission.

The Knights took a 2-0 lead 4:45 into the second period as D'Lane Sather scored after a misplay by the Nitany Lions in their own end. Keaney and Low picked up the assists. Penn State capitalized on the only power play of the period to cut Neumann's lead to 2-1. With five minutes left in the period, the Nitany Lions scored again to tie the game at two. The teams went into the locker rooms with the tied score.

Neither team could score in the third period, despite Penn State having 21 shots on goal. Curley made some outstanding saves to keep the game tied and send it into overtime.

Neumann (10-4-2) will put its six game winning streak on the line as it gets back into conference action on Friday when it hosts Manhattanville. The puck is set to drop at 7:00 PM.
Posted by Kyle Rossi at 2:12 PM