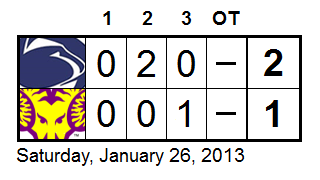 It's only a mild exaggeration to suggest that No. 4 Penn State, now 6-2-1, earned a bid to the ACHA National Tournament in Ashburn, VA from March 7th through 10th with a 2-1 win at second-ranked West Chester on Saturday. And it's no exaggeration at all to suggest that if invited, PSU will be among the title contenders - in four games against the nation's top two teams (California (PA) being the other), the team now has a 1-2-1 record.

Stealing from myself via PSUWIHC.com to decribe the signature win, because I can:

Tara Soukup's second-period goal powered PSU to a 2-0 lead and would hold up as the game-winner. Freshman sensation Devon Fisk assisted Soukup and also scored the game's opening goal earlier in the period, with help from Mandy Mortach and Ashton Schaffer. Fisk now has 12 goals and 16 points in just nine games.

After going up two with 5:31 remaining in the middle frame, Penn State would continue to keep a potent WCU team at bay for most of the rest of the game. Although Becky Dobson broke Katie Vaughan's shutout bid with 1:09 remaining, the junior goaltender still polished off her fifth win. 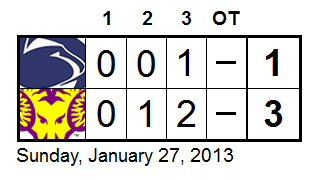 While a sweep would have been unreal, PSU had to settle for a split - still an outstanding weekend considering the opponent and the stakes.

Once again, from the PSUWIHC.com recap:

On Sunday, Carly Szyszko connected on a third-period goal from Mortach and Mary Kate Tonetti to pull Penn State within 2-1 with 15:32 remaining, and just 37 seconds after Amanda Vito had scored the Golden Rams' second goal. But the team would not find an equalizer, despite a 31-27 shooting advantage over the course of the game. A couple minutes after a late power play was foiled by a quick PSU penalty, head coach Pat Fung called Vaughan to the bench for an extra skater, but the only outcome to the gamble was a game-sealing empty-netter by WCU's Colleen Tweedy.

Defensively, the team turned in a stellar effort, limiting Dobson, the leading scorer in ACHA WD2, to just one meaningless goal and one assist over the two games. Coming into the weekend, Dobson had a staggering 55 points in 12 games, part of an offense that averaged 6.58 goals per game - but was held in check by Vaughan and PSU's blueliners. The WIHC also successfully killed all eight WCU power plays over the weekend, including a 1:50 stretch of 3-on-4 and 3-on-5 time during Sunday's game.

A new ACHA WD2 poll is expected out this week, and while Penn State doesn't have much room for upward mobility, a jump to the third spot and added distance above the national tournament cutoff are reasonable expectations.

Penn State's next games - the last ones before nationals bids are awarded - will be February 9th and 10th at Buffalo, an ACHA WD1 team. 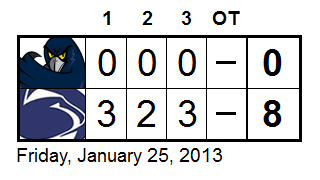 Seniors Ryan Demuth, Mac Winchester, Kevin Lowthert, Joe Zitarelli, Mike Broccolo and Tyler Starn received their official send-off with a Senior Night trashing of Monmouth that, as it turned out, was a showcase for many of those playing their final home weekend.

Fredrik Linge opened the scoring, from Austin Meehan, at the 6:16 mark of the first period, and the hosts never looked back. Chris Lewis - on the power play - and Linge expanded PSU's lead to 3-0 after 20 minutes, before Lewis added another and Joe Bonazelli also scored in the second.

The third period highlighted former Icers-turned-Ice Lions, as Broccolo, Zitarelli and Winchester scored to close things out. Broccolo also had a pair of assists in the game, while Zitarelli had one. 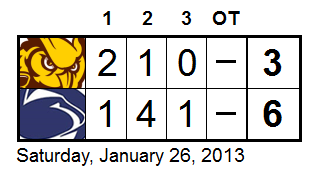 The Ice Lions became the first of the four University Park hockey teams to play its final game at the Ice Pavilion - and a decisive win over Southeast No. 5 Rowan not only closed the barn in style, but gave Southeast No. 2 PSU some ammo in its push to secure an autobid to the ACHA national championships.

The Profs stunned Penn State 43 seconds into the game with a goal by Alekos Polis, and took a 2-1 lead into the first intermission when J.C. Caulfield scored on the power play with 11:40 left to answer Dylan Jones' tying goal.

Four unanswered goals - by Taylor Vincent, Peter Daley, Linge and Lewis - in the second period would give the Ice Lions the upper hand in the game, and Lewis would add an empty-netter with 19 seconds remaining in the game for the final margin. Ten different PSU skaters collected points, headed by Lewis' two goals, Brandon Russo's two assists, and Linge's one of each.

PSU will now take on a three-game weekend thanks to a makeup at Rider on Friday, a match initially cancelled by Hurricane Sandy in October. Previously-scheduled games at St. Joseph's and at UMBC are on Saturday and Sunday. Another Sandy makeup, a rematch at Monmouth on February 10th, will close out the regular season.
Posted by Kyle Rossi at 3:54 AM