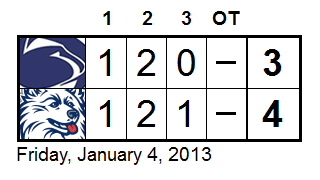 True to the victor-spoils rules for games I did not witness, here's the UConn recap.

Behind a career-high 39 saves from Matt Grogan and a game-winning goal by freshman Patrick Kirtland, the UConn men's hockey team defeated Penn State in Storrs, 4-3. The Huskies improved to 6-8-2. The two teams face off again on Saturday at Freitas Ice Forum in Storrs at 7:05 p.m.

Tonight's game featured two of the top rising programs in NCAA hockey. 2012-13 is Penn States inaugural season as a Division I program and the Nittany Lions will join the newly formed BIG Ten Conference in 2013-14. The Huskies will be a fully funded program and join Hockey East, the nation's premier hockey conference, in 2014-15.

A back-and-forth hockey game saw UConn with leads of 1-0 and 3-2 before pulling out the thrilling 4-3 victory in front of the home fans. The Huskies were outshot 42-21 but kept many of the attempts from distance. The UConn skaters blocked 24 shots on the night.

"That's the team we need to be. We have to be willing to sacrifice to get a win," said Assistant Coach David Berard. "We had some good goals but struggled to get going offensively. The guys have to be willing to lay out and sacrifice sometimes to get a win in a game like this and that's exactly what they did. The coaches were really proud of the effort they gave in that regard."

Senior goaltender Matt Grogan earned his third consecutive start and made a career-high 39 saves, including 15 in the third period.

"They have some big guys in front of the net so it was tough to fight through screens but we did a good job in front and I was able to make some saves," said Grogan.

Kirtland scored the game-winning goal with a turn-around wrist shot at the near post just under the cross bar.

"We expect him to be power forward, drive the net, possess the puck, finish checks and just be a physical presence and he did that tonight," said Berard. "He's done it in stretches the first half but he's been a bit inconsistent. Tonight he scored his goal because he played that way. If he continues to do those little things, he'll be a really important player for us."

UConn opened the scoring just 28 seconds into the game with Jordan Sims wristing a shot into the top-left corner from the slot off a feed from Sean Ambrosie behind the net. Brant Harris started the play along the left wall. The goal was Sims' fourth of the year.

The Nittany Lions evened the score at 5:55 with David Glen tipping a shot in the slot past Grogan on the power play. Luke Juha fired the puck from the right point after a face-off win by Glen. The goal was Glen's ninth of the year.

Penn State took the lead for the first and last time at 2:39 when Taylor Holstrom, a transfer from AHA foe Mercyhurst, had a shot from the left side ricochet off a UConn defenseman and in.

The Huskies regained a 3-2 lead with two goals in a 1:07 span. Brant Harris sent a shot from the left wall towards net that bounced off the skate of a PSU defenseman and past netminder Matthew Skoff.

At 9:29, freshman Shawn Pauly outraced his defender down ice to bury a rebound in front off a shot from Evan Carriere. The goal was Pauly's first as a UConn Husky.

Penn State's Connor Varley evened at 13:46 through traffic with a shot from the right side. After two periods, the score was tied, 3-3, with Penn State ahead on shots 27-17.

Kirtland's game-winning goal was his second tally of the season. Kirtland collected a loose puck on the inside of the right face-off circle at 6:27 and snapped a shot under the cross bar to give UConn the victory.
Posted by Kyle Rossi at 10:45 PM