I occasionally break my "no recap-ish stuff" rule for stuff from FoTYT IcersGuy and Mary Clarke, so I figured I could do it for The Munn Minute as well. Sometimes it's interesting to get an opposing perspective on your big moments, like Saturday's win at Michigan State.


Some people might call it the low point in the season, but I guess we'll have to see. You can't really sugarcoat this, MSU shouldn't lose to Penn State - even with the season the Spartans have been having this year. Heck, the Spartans won Friday without two of their three leading scorers. With that said, Penn State wasn't going to make it easy. They did beat Ohio State earlier in the year, and they rallied a couple of times this weekend to make MSU work for it. The Spartans had a 2-0 lead disappear on Friday as well as a 3-2 lead.

The latest in a series of outstanding Ross Insana features on the women's team - this one hits on the team's top line of Yox, Descoresie and... Gross. I need to come up with a nickname for her.

Because I missed Women's Commit Cycle last week (the latest of about 60 plans is to get it out this week, then stagger them going forward to spread out the agony of doing them), I didn't get to share this great piece on women's signees Amy Petersen, Laura Bowman and Sarah Nielsen. So I'm fixing that.


"Laura and I knew of each others' [college] options, but we came to our decision to go to Penn State on our own," Petersen said. "It was pretty cool when we told each other that we had decided to go there. We'll have the chance to make our own traditions and write our own history."

The independent decisions of Petersen and Bowman weren't lost on Nielsen.


"I had been thinking about Penn State and a few other schools, but when I heard that they committed there, I thought, 'This could be a really good thing,'" Nielsen said. "I respect them so much that I knew I wanted to be a part of it when I heard they were going there."

Speaking of Commit Cycle, this goal by 2014 defenseman Bo Pellah was mentioned in last week's men's post, but before we had the available video to go with it.

The ACHA is a respectable 4-5-0 against the NCAA, according to this article. I'm not entirely sure that's accurate: Alabama-Huntsville beat Alabama twice, Vanderbilt once and Oklahoma twice, while PSU beat Arizona State once. So that's six NCAA-over-ACHA games right off the top of my head. Fair to include ACHA D3s in that calculation? Not really, but I didn't come up with the parameters. Regardless, ACHA hockey is good hockey, remember that kids.

PSU football legend Jack Ham is a minority owner of the NAHL's first-year Johnstown Tomahawks (as is Shane Conlan, another product of Linebacker U). Here's a nice story on the former Pittsburgh Steeler's ties to the junior hockey team, which will honor him with a bobblehead on Thursday night. 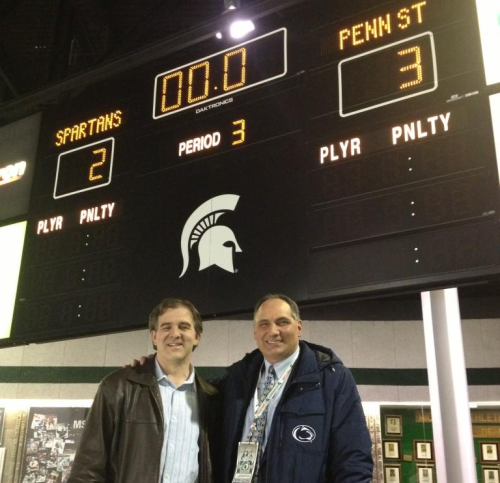 Joe Battista has had this Twitter account for a while, but he finally started using it this past weekend, in order, among other things, toss up a photo of himself with former Icers player and assistant coach Andrew Strasser in front of the Munn Ice Arena scoreboard.

Remember obsessing over a similar video taken at Citizens Bank Park about 13.5 months ago? Those were good times. The Miami-Notre Dame, Minnesota-Wisconsin doubleheader at Soldier Field will be played on February 17th.

LVC ice hockey survives the conditions, but fall to Delaware 6-2 in Outdoor Classic
(Stack the Pads)

Speaking of outdoor hockey, ACHA D1's Lebanon Valley College and Delaware took advantage of the ice installed at HersheyPark Stadium for an AHL game between Hershey and Wilkes-Barre/Scranton last week.

Finally, one of the more intriguing stories in Pennsylvania hockey came to a premature end as the Williamsport Outlaws of the Federal Hockey League suspended operations about six weeks before the end of their first season in the Little League capital. The "intriguing" part stems from the fact that they attempted to play all of their home games outside at Bowman Field, which usually hosts baseball's Williamsport Crosscutters. As it turned out, they made it through all but one of those games, which were frontloaded relative to the season as a whole to account for the start of baseball season.
Posted by Kyle Rossi at 8:16 PM