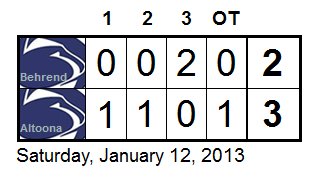 In a game that had suddenly gained the feeling of a missed opportunity for Penn State Altoona, Brandon Herrman capitalized on his chance to pull back his team's sure win that suddenly wasn't.

Herrman's breakaway goal - following his interception at the defensive blue line - with 3:06 left in overtime propelled Altoona (5-8-1, 2-6-0 CHE) to a stirring win over Behrend (7-10-2, 2-5-1 CHE) Saturday afternoon at Galactic Ice in Altoona to open its spring semester schedule.

For most of regulation, it didn't really look like Herrman's sudden-death heroics would be necessary. Following a back-and-forth first 15 minutes of the game, Altoona's Jeff Nelson buried from the slot on a nice centering feed from Herrman out of the corner with 4:03 left in the opening period to give the home team the lead after 20. However, following the Nelson goal, Altoona failed to capitalize on consecutive Behrend penalties late in the period - perhaps offering some degree of foreshadowing.

Roughly 20 minutes of game time after Nelson's goal, and ten after having an apparent goal cancelled due to the net coming off, Conlan Sodrosky gave Altoona a 2-0 lead on a similar-looking play, this time with sophomore C.J. Dunton serving as the feeder. Sodrosky almost added a second about a minute later on a spectacular end-to-end rush, but Behrend goalie Kevin Smyth was up to the task.

Throughout the second period and much of the third, the relatively small lead appeared safe. Altoona built up a 24-12 shot advantage at the halfway point of the third period and, thanks to outstanding backchecking, was stifling Behrend's transition game. The lead even survived a goal by the Erie campus with 14:36 remaining when, after a lengthy delay, it was determined that Behrend's Jared Bagnato exited the penalty box before his interference call had expired, wiping out the tally.

It didn't turn out to be the backbreaking moment it appeared at the time. Brad Chiffon backhanded a third-chancer past David Winegarden to cut the Altoona lead to 2-1 with 7:29 left. Six minutes later, Behrend pulled Smyth and the increased pressure resulting from the extra skater paid off when star defenseman Robert Banks dribbled an equalizing shot though with just 14 seconds remaining to force an unlikely overtime.

No matter. Banks rapidly went from hero to goat when he turned the puck over to Herrman in the extra period, handing Altoona a key win to jump start its CHE stretch run and its chase for a top-five league finish and the resulting playoff spot.
Posted by Kyle Rossi at 6:30 AM